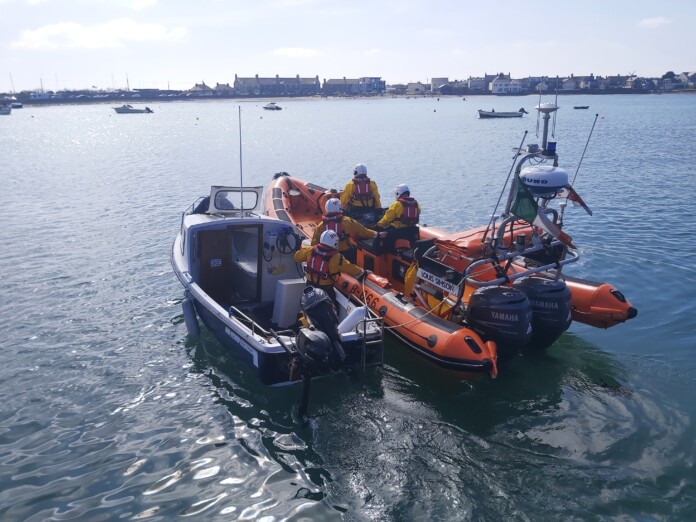 Skerries RNLI says it rescued nine people who got into trouble in water over a busy weekend.

In a statement, the life boat service said that three children were rescued on Saturday evening.

“Shortly after 6pm on Saturday evening the pagers sounded following multiple 999 calls to Dublin Coast Guard from the public.

“It was reported that there were three children in the water trying to return from Shenick island to the south beach after being cut off by the rising tide.

“The Atlantic 85 inshore lifeboat was launched and made it’s way around the headland at Red Island before heading for Shenick.

“As the lifeboat approached the island, they could see the children making their way along the sand bar back towards the island.

“A sea kayaker had seen the situation unfolding and landed on the island to convince the children to come out of the water and back to dry land.

“The lifeboat was carefully maneuvered into the shallow waters before the volunteer crew assisted the children into the lifeboat.

A quick first aid assessment determined that they were very cold but otherwise unharmed.

“They were brought safely ashore at the lifeboat station where they were reunited with their parents who had been brought to meet them by member of Skerries Coast Guard Unit.”

Another operation, which occurred on Sunday morning, saw the RNLI lifeboat be deployed to near a beach in north Skerries where a motorboat suffered from engine failure.

“After a short search, they located the casualty vessel, a 17ft motorboat with four adults and two children on board, anchored off the north beach.

“A tow was established, and the vessel was brought safely alongside the harbour in Skerries.

“At the time there was a force three to four south easterly wind blowing and a moderate chop in the sea.”

Speaking about the call outs, volunteer Lifeboat Press Officer for Skerries RNLI, Gerry Canning said: “It’s been a very busy few weeks for the station, but our volunteers are always ready to respond.

“We’d like to remind everyone out enjoying the coast in the good weather to check the tides, and always carry a means of calling for help. If you see someone in trouble, dial 999 and ask for the Coast Guard”