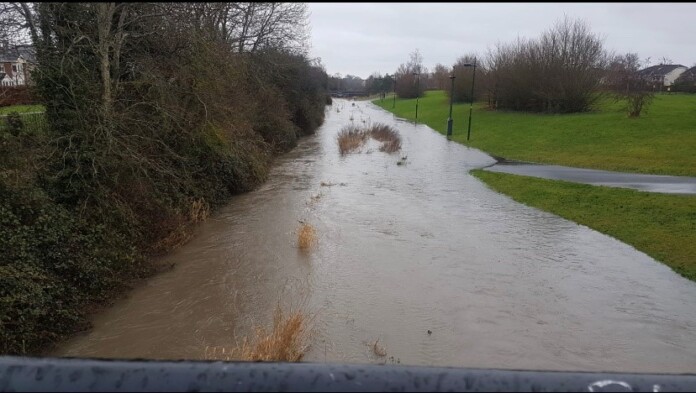 A Lucan councillor is calling on South Dublin County Councillor to secure the banks of the Griffeen River as it has been “continuously subjected to flooding over sometime.”

In 2000, the Griffeen River flooded numerous homes in the areas of Grange Manor and the Old Forge.

“The second culvert under the Griffeen Avenue resolved the issue but unfortunately, over the past 20 years the river has dumped its waste at the culverts,” says O’Toole.

“The capacity of both culverts has been reduced and have increased the risk of flooding.

“The section of the river in front of both culverts needs to be cleaned out to increase the capacity of the culverts and reduce the risk of flooding.”

O’Toole says that after a few days of rain, the footpaths running parallel to the river are prone to flooding.

“This is a regular occurrence which leaves germs from the river on the footpath.

“The water is now getting closer to the electric lights on the side of the footpath,” she said.

At a recent area committee meeting, O’Toole tabled a question asking the council to address the matter.

She said: “This area has been continuously subjected to flooding over sometime and more recently the flooded areas have increased, and many park users have taken to sharing these flooded areas online or directly with me.

“The footbridge in the park on Hayden’s Lane was full of water underneath resembling what looked like a river running under it.

“Given that there’s plans to construct ICWs (Integrated Constructed Wetlands) along the Griffeen Park, could the management confirm of the recent floods will be resolved when the ICWs are completed.”

According to Irish Water, an ICW is a “type of sustainable wastewater treatment system that is designed to look and function as a natural wetland does.

“Constructed wetlands are created for the purpose of treating wastewater from small, rural communities in an environmentally-friendly way before allowing it to return to the water system safely.

“Constructed wetlands are usually made up of a primary settlement tank where wastewater from the community is collected and from that, several ponds follow which are planted with wetland plants including reeds, rushes and sedges.”

O’Toole has also asked the council to establish a separate committee meeting to deal with the issue along with the pollution in the river.