A Finglas musician will be keeping one eye on the Austrian charts this week.

Local singer-songwriter Darren A. Flynn is the co-writer of the debut single from Austrian artist B.B. Cole (pictured below). 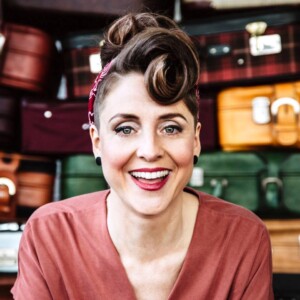 Titled “Emotional Baggage,” the song, which has a serious message, came about thanks to a chance meeting.

“At the end of 2019 I was working with ‘The Songwriting Collective,’ a group dedicated to the art of song writing in the Dublin area,” Darren tells Northside People.

“I was paired up with B.B, who was over on a short trip to Dublin, and we had a couple of hours to come up with a song.

“I heard her lyrics, which were part a song she played in her live set and came up with a few suggestions.

“We were both delighted with the result”

“I was travelling a lot at the time and in the baggage claim areas at the airport I observed how much stuff people carry around with them,” B.B. Cole explains.

“And it’s the same with our emotions and memories.

“Everyone has baggage. But what if we just don’t take the emotional baggage with us and leave our painful memories behind?

“That’s how the idea for the song came about,” she says.

B.B said she had only planned on exploring Dublin with friends and maybe taking in a concert during her short visit to the city.

“I signed up for a songwriting workshop on the off chance, without knowing what exactly was going to happen there,” she says.

“I ended up at “The Songwriting Collective”, where we were randomly thrown together in groups of two.

“I had already finished writing a paragraph and Darren had the idea to play the music to it in a more bluesy way with open chords.

“In two hours we had everything ready and were able to present the song at the Open Stage in the pub that evening.”

The song is in English but has a German middle section.

“In Austria we have a children’s game called “Ich packe meinen Koffer”, which means “I’m packing my bag,” B.B. says.

“I asked Darren if there was such a game in Ireland.

“He said no, but thought the German line sounded good to his ears. So we just tried it. And sure enough, the Irish listeners found it very charming.”

Darren, whose sound has been described as a modern take on roots-tinged rock n’ roll with Americana and Bluegrass elements, has also recently released his debut solo single ‘Mountain Whiskey’.

The track, which was produced by renowned Irish producer Rob MacLeod and mastered at Abbey Road Studios, is an energetic tune about a wily old man who makes moonshine half-way up a mountain, and is based on a real life character from Darren’s past.

Featuring a heady mix of banjo, drums and electric guitar, it’s a rocking hoe-down right from the beginning!

“I released it last month and it’s been going very well, getting plenty of airplay on Irish national radio and several local stations as well,” Darren says.

“It’s also been getting a lot of play, and attention, in Georgia in the US which I’m really delighted with!”