Home Uncategorized Legislation submitted that will see money seized by CAB put back into...
Uncategorized 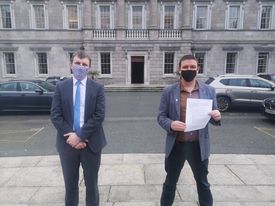 This legislation will see money seized by the Criminal Assets Bureau put back into the communities that have been most affected by crime.

Deputy Ward said the money seized by CAB “must be put back into the communities in which the criminals and drug dealers were operating in.”

“In response to a parliamentary question I raised the Criminal Assets Bureau seized almost €65 million in 2019 .

“This is a huge increase on previous years and is very welcome news.

“The vast majority of the money seized by the Criminal Assets Bureau has been extracted from the communities in which the criminals have been active.

“It must therefore be returned to these communities.

“Sinn Féin has always advocated that any money seized by CAB should be put back into communities to tackle disadvantage and also to fund prevention, treatment and rehabilitation services in the fight against drugs.

“I represent Dublin Mid West and grew up in North Clondalkin. Parts of my constituency have been ripped apart from drug use over the years.

“The Proceeds of Crime (Investment in Disadvantaged communities) Bill 2021 will require the Minister for Finance to carry out a review of the financial supports required for disadvantaged communities affected by crime and reinvest the money generated through the seizure of assets by the Criminal Assets Bureau in those communities, with a view to alleviating the impact of crime and enhancing crime prevention measures

“Any money invested in our communities is on top of allocated resources and not seen as a replacement. It will also not hinder community organisation in applying for any additional resources they require through the normal funding channels.

“It does not happen by accident that most of the money seized by CAB originates in areas that are highly disadvantaged.

“I have had positive soundings from Government parties when I have raised this issue in the Dail and I am hoping that this Bill receives cross party support when it reaches the floor of the Oireachtas.

Carphone Warehouse is closing more than 80 stores in Ireland with up to 500 workers set to be made redundant. The company are closing their...
Read more
Uncategorized

Gardaí are seeking the public’s assistance in tracing the whereabouts of Maggie McCarthy, aged 34, who was last seen in the James Street area...
Read more
- Advertisment -