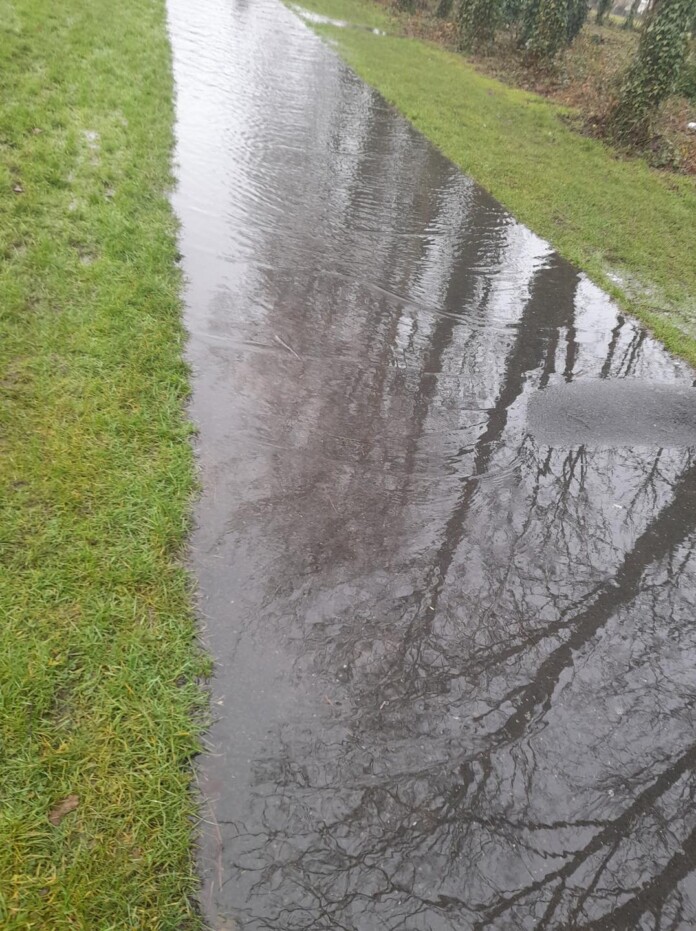 FCC to investigate flooding in parks after several complaints from locals

Fingal County Council is investigating the cause of flooding in public parks in the Ongar area after receiving multiple complaints from local residents.

The news comes after two councillors tabled questions to the chief executive at this month’s area committee meeting about the severe flooding in Hartstown Park and Hazelbury Park.

Sinn Fein councillor Aaron O’Rourke asked that the council “carry out an assessment of the current drainage in Hartstown and Hazelbury Park and installs a new drainage system in areas of both parks where a new system is deemed necessary.”

Independent councillor Tania Doyle also tabled a question asking that the chief executive “undertakes a review and investigation into the recent high levels of flooding within public parks in Dublin 15.”

Doyle said that the investigation could help determine “why the flooding occurs and to identify any remedial action(s) which may be required to alleviate the flooding at these locations.”

Doyle told the Northside People that Harstown and Hazelbury parks “in particular have seen significant flooding in certain locations from heavy rainfall of late.”

In response to the questions, the local authority said: “There has been a notable increase in complaints in recent weeks regarding this issue, mainly after heavy rainfall incidents.

“It should be noted that on inspection many of the sites have already drained away naturally.

There are however a number of locations within Harstown Park and Hazelbury Park which require more detailed investigation to indicate what remedial works are required to mitigate or at least reduce incidents of sustained pooling.”

Doyle says that “on behalf of the community I will be monitoring the locations myself and in the event of any reoccurrence will be calling for appropriate infrastructure to be put in place at the earliest opportunity.

“Our parks have become so important to so many of our community that they must be maintained at optimum standard and I have no doubt that Fingal County Council will undertake any and all remedial actions warranted as and when required to maintain that standard.”

O’Rourke also asked other park features such as benches, lighting and entrance ways.

The council said that any future benches will be installed with concrete slabs underneath as well as adding a wheelchair space beside each one.

However, installation of lighting in Hartstown Park is currently not being considered by the local authority as it is not current council policy.

This policy is currently being debated as part of the Transport and Infrastructure Strategic Policy Committee “so hopefully we will see a change in near future,” says O’Rourke.

Works on the Oakview Park pedestrian entrance to Harstown Park are not considered essential and are currently on hold due to the level five restrictions.