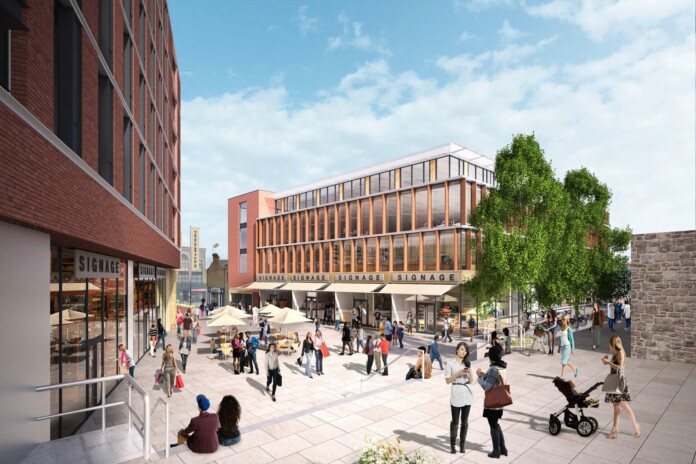 PLANS for the redevelopment of Phibsborough Shopping Centre are back on track after a disagreement that almost shelved the entire project was resolved.

Developers MM Capital, who own the entire Phibsborough Shopping Centre site, recently lodged an amendment to their planning application.

The planned €50 million revamp, which includes a new civic plaza for the local community, a new entrance-way to a redeveloped Dalymount Park, upgrading of existing office and retail space and a 321-bed student accommodation building, had looked doomed last year.

This was because Tesco, who are anchor tenants in Phibsborough Shopping Centre, objected to the plans over concerns the new development would affect deliveries to their store.

“Currently the store receives deliveries to the front,” Tesco said in a statement explaining their reasons for objecting.

“This right to deliver to the front of the store is contained in our deed of conveyance and we have been making deliveries in this manner for more than 20 years, since the store was operated as a Quinnsworth.”

MM Capital Director Derek Poppinga told Northside People that the problem has now been addressed and they have reached an agreement with Tesco.

“The scheme we’ve lodged is an amendment to the one which was granted so is very similar to this with changes addressing building lines and legal rights which Tesco had and also a conversion of the student accommodation to co-living,” Poppinga said.

“This amendment planning application is the conclusion of 15 months’ work in conjunction with the planning authorities and further engagement with Tesco.

“Thankfully, I can also confirm that we have reached an initial agreement with Tesco around the development of the centre, subject to the outcome of this planning process and related matters around it, which removes the last major hurdle around the redevelopment.

“It’s taken us four years to get to this point and while we are not there yet, the above marks a significant step towards this goal.”

However, one local representative has said residents are “seriously concerned” about the proposed development of Phibsborough Shopping Centre.

Councillor Colm O’Rourke, Fine Gael Councillor for the area and local resident said not everyone is happy with the plans.

“Having consulted with the wider community about this proposed redevelopment, most residents are saying to me that Phibsborough Shopping Centre is in need of a makeover but that they have serious concerns with this application and believe it is not an accurate reflection of the type of development that is needed for the Phibsborough area and that they would prefer proposals that would better provide for the community,” Councillor O Rourke said.

“It’s definitely a proposed development that is generating a lot of discussion among people in Dublin and I would remind people of the importance of submitting their views through the An Bord Pleanála process before the last date of submissions on January 25th.”

Frequently described as the ugliest building in Ireland, the shopping centre was initially described as a “trend setting development” when it was opened in October 1969.

At the time it was the Northside’s first major office block development and it housed 22 shops on 30,000 square feet with 34,000 square feet of office space in the eight-floor tower block.

However, it has been a cause of controversy and disdain for the last 51 years, drawing the ire of everyone from architects to the local community, the press and town planners due to its architectural design.

MM Capital bought Phibsborough Shopping Centre in 2016 and the following year lodged a planning application to redevelop the centre site.

In 2018 An Bord Pleanála granted planning permission for the 10,220 square metre project on the 2.8 acre site D7 site.

That planning application has now been amended as per the agreement between MM Capital and Tesco.

MM Capital say their plans will create “a vibrant public space and civic plaza for the local community” and “represent a unique opportunity to regenerate this centrally located site, contributing to the regeneration of the wider Phibsborough area.”