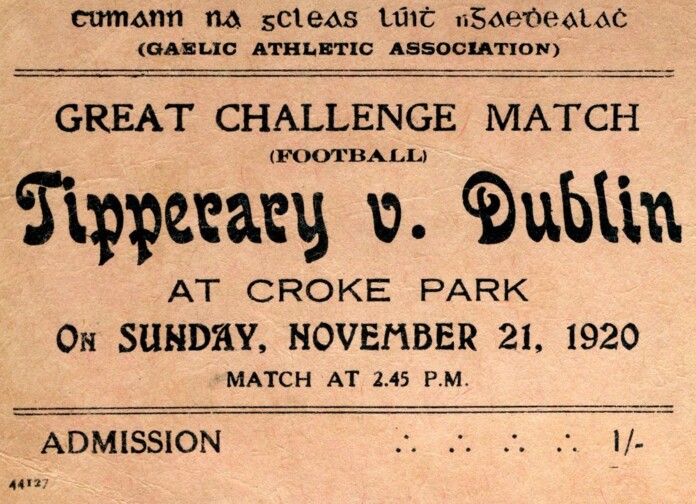 A special commemorative edition of the popular series History on Your Doorstep dedicated to Bloody Sunday is set to air.

Written by Liz Gillis and the Council’s Historians in Residence, the special edition will be launched by Lord Mayor, Hazel Chu at a free webinar online event at 7pm on Saturday November 21.

Minister Catherine Martin will also be in attendance at the webinar which will feature an illustrated presentation on Bloody Sunday and the killings of Dick McKee, Peadar Clancy and Conor Clune, followed by a Q&A session with the authors of the book.

“By 1920 the War of Independence in Ireland was escalating, and 21st November Bloody Sunday was the darkest day in this vicious conflict.

“This new book dedicated to Bloody Sunday is available for free, so that everyone can read and remember the story of this fateful day – it is an accessible and insightful look at the events of the entire day and its aftermath.”

November 21 is the 100th anniversary of Bloody Sunday, a day of extreme violence in Dublin City, when 32 people were killed in a single day.

The dead included 13 spectators, three of them children, and 1 GAA player (Michael Hogan), killed in Croke Park when Crown forces opened fire on the crowd attending a Gaelic football match between Dublin and Tipperary.

History on Your Doorstep will be available as a free ebook initially on Dublin City Council’s website and, once restrictions allow, people will be able to pick up free copies from the Council’s 21 public libraries across the city.

To mark the central role of GAA in Bloody Sunday, Dublin City Libraries, working in partnership with Dublin GAA, have produced an online exhibition about Bloody Sunday which will be available for club websites.

The Council’s historians in residence will offer talks to GAA clubs across the city, and the library service has produced a list of recommended reading and listening.

The book, exhibition, reading list and registration for the webinar can be found at https://www.dublincity.ie/library/blog/bloody-sunday-21-november-1920

This event is free but registration is required at https://bloodysunday1920.eventbrite.ie

A report has revealed that parents and partners of drug users in Dublin’s north-east inner-city are almost as likely to experience drug-related intimidation as...
Read more
Dublin

A Southside TD says there is a "lack of action" to tackle businesses flouting the public health guidelines by opening when they shouldn’t or...
Read more
- Advertisment -