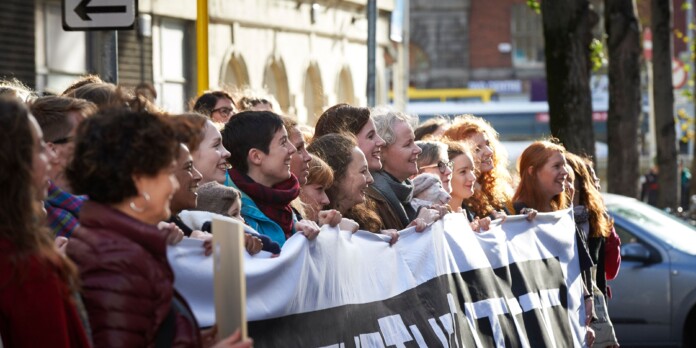 The National Library of Ireland has today announced the donation of the archive of the #WakingTheFeminists movement to the national collection.

The donation was marked by an online event, attended by Minister for Tourism, Culture, Arts, Gaeltacht, Sport and Media, Catherine Martin.

#WakingTheFeminists was a highly successful grassroots campaign for equality for women in Irish theatre that ran from 2015-2016.

The #WakingTheFeminists archive is the third of three born digital archives selected by the National Library of Ireland for its ‘digital pilots’ project.

The other two donations secured are the records of writer, Marian Keyes, for her novel, The Mystery of Mercy Close, and the archive of the Yes Equality campaign.

Through this project, the Library is exploring the ways in which such contemporary digital materials are acquired, catalogued and made available to the public.

Speaking about the importance of the #WakingTheFeminists donation, Director of the National Library of Ireland, Dr Sandra Collins said:

“This archive is a comprehensive record of a campaign which shone light on under representation of women in the theatre industry; and continues today to bring about change in women’s employment in the industry, on the stage, in production and direction.

“The #WakingTheFeminists archive is the latest archive to be received by the NLI under its ‘digital pilots’ project.

“Much of our national story is now being created digitally, so the Library is piloting ways to work with and make digital records available to researchers.

“Once this work is done, the archives can act as important sources for a key moments in Irish life.

“Overall, the three projects piloted were selected by the Library to contribute to our policy of inclusiveness:  the Marian Keyes archive reflects the importance of collecting women’s creative work; the marriage equality archive represents a campaign which brought us closer to recognising diversity; while the #WakingTheFeminists archive is reflective of women’s activism.

“Historically, women have been under-represented in national collections; these digital pilot projects are an example of proactive collecting of the archives of under-represented voices and communities,” added Dr Collins.

“I am delighted to mark the acquisition by the National Library today of the #WakingTheFeminists digital archive.

“This movement began in 2015 and grew to become a focused and highly-effective campaign, with worldwide reach, to address the under representation of women in the world of Irish theatre, and in Irish culture more widely.

“History is made every day, but as we know the record can disappear very quickly. It is essential that our National Cultural Institutions act to collect the memory of contemporary Ireland as it is being made.

“With so much of that national memory being created digitally, I am pleased to see our National Library exploring innovative ways to collect and share that story.

“They are partnering with authors and movements, like #WakingTheFeminists, to work with 21st century archives:  digital records and photographs, social media posts, and electronic drafts of literary work.”

A number of activists from #WakingTheFeminists attended the donation event.

“The #WakingTheFeminists campaign was built on the fact that stories matter. When we called for equality for women in Irish theatre, we asked whose stories were being told, who was telling them and what were they saying about us.

“Women’s stories matter – the establishment of this archive marks a small part of the national recognition of that. We couldn’t feel prouder.”