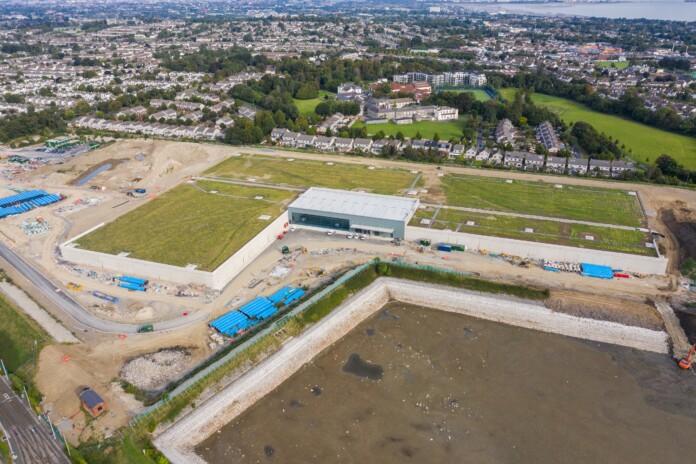 Over 200,000 Dubliners will now enjoy a much safer and more secure water supply with the completion of the new Stillorgan Reservoir by Irish Water.

High quality drinking water from the new covered reservoir is now being supplied to customers across south Dublin as a result of this landmark project.

The original Stillorgan Reservoir had supplied drinking water to the community for over 150 years.

By building a new covered reservoir, Irish Water has taken an important step in ensuring that the water supply infrastructure is in place to meet current requirements and the future needs of its customers.

The size and scale of this project is very significant.

The project involved draining down and decommissioning the three existing reservoirs at the Stillorgan site, and the construction of a new covered reservoir within the footprint of the largest reservoir.

John Prendeville, Project Manager with Irish Water, explained: “Generations of Dubliners have been supplied with clean drinking water from this site for over 150 years. The Stillorgan Reservoir Upgrade Project represents a €50m investment in the long term solution to safeguard this strategically important part of Dublin’s water supply for the future. The reservoir site will remain a live drinking water storage, treatment, and distribution centre for over 200,000 customers and an essential part of Dublin’s water services infrastructure for the long term.

“The new reservoir has the capacity to store 160 million litres of treated drinking water – that’s the equivalent of over 60 Olympic sized swimming pools. This will mean a much safer and more secure water supply for customers across south Dublin. The significant milestone has been delivered on time and to budget through a hugely collaborative effort between Irish Water, Dublin City Council, Nicholas O’Dwyer Ltd, Murphy International Ltd and of course, the local community, whose cooperation and patience have allowed these works to succeed.”

The Stillorgan Reservoir site was originally constructed as part of the Vartry Water Supply Scheme. The overall scheme includes two impounding reservoirs at Roundwood, County Wicklow, a water treatment plant, a four kilometre long tunnel under Callowhill and 40 kilometres of trunk mains to deliver water to the Stillorgan Reservoir. At the time, the scheme greatly improved sanitation in Dublin City and helped reduce outbreaks of cholera, typhus and other diseases associated with contaminated water.

The new reservoir is a key component of Dublin’s strategic water infrastructure, which links the supply from five major water treatment plants through an integrated network of trunk mains and reservoirs. The reservoir and associated infrastructure will have the capacity to support future water demand through 2031 and beyond.

Irish Water previously installed a new Ultra Violet disinfection system to mitigate the recontamination risk of drinking water stored in the reservoir which resulted in the removal of the site from the EPA’s Remedial Action List in 2015.

Now that the new covered reservoir is operational, draining and decommissioning of the remaining open reservoir storage on the site has commenced. The decommissioned areas will be landscaped and the completed site will be reserved for future water services infrastructure to secure drinking water for the community.

To find out more about the fascinating history of Stillorgan Reservoir and its role in supplying generations of Dubliners with drinking water, check out the documentary The Story of Water which can be viewed online at www.water.ie/storyofwater

The publication of carbon budgets by the Government should be welcomed, but the devil will be in the detail, says Labour's climate spokesperson Ivana...
Read more
Dublin

‘Get Gardai on the streets this Halloween’ says Southside TD

Gardai must be visible in communities to ensure that anti-social behaviour is minimised in our communities particularly with the Halloween weekend approaching, according to...
Read more
- Advertisment -