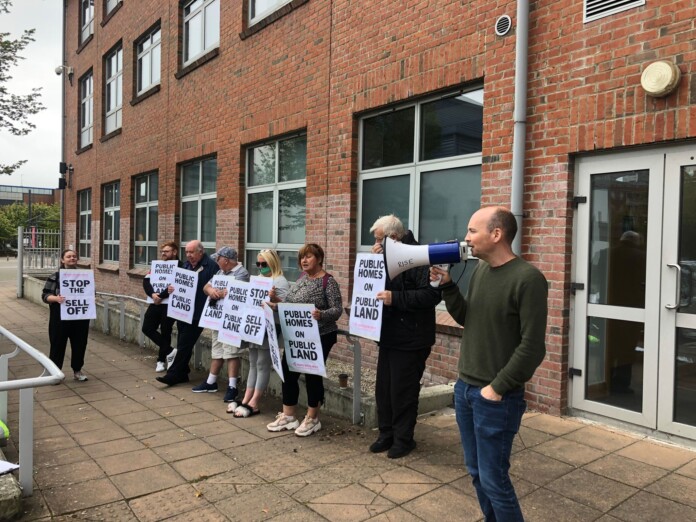 Council votes to sell off land in Killinarden

A motion to sell the land for the Foothills development passed with 27 votes in favour, two against and four abstentions.

The site will consist of residential development of 372 affordable units and 123 private units.

There will also be 125 social housing owned by South Dublin County Council with a total units of 620 on the overall lands.

In addition, there will be parks and community facilities as part of the development.

People Before Profit organised a protest outside County Hall in Tallaght to demand that public land would not be sold to private developers.

Councillor Madeleine Johansson (PBP) commented: “It’s extremely disappointing that this land has now been sold to a private developer.

“This means that 123 families that are in need of housing will not get a social or affordable home because they will be sold at market prices for profit.

“The land could have been developed directly by the council with 100% social and affordable housing.

“Many councillors declared at the meeting that they disagree with this model, but then proceeded to vote for it or abstained.

“If councillors were serious about housing, both in terms of delivery and policy, then they should at least stand by their principles and vote in line with their views on policy.”

Paul Murphy TD (PBP) added: “In the midst of a massive housing crisis, Fine Gael and Fianna Fáil have given away yet more public land to a private developer.

“The result is that only one out of five houses built on public land will go to the almost 10,000 people on the housing waiting list in South Dublin County Council.

“The rest will be sold at extortionate market rates, or as part of a pseudo-affordable scheme, at a 15% discount.

That still means they will be out of reach of most workers. We need public homes on public land – the sell-offs need to stop.

“Instead this land should be used for 100% social and genuinely affordable housing.

“The support of the Social Democrats and Labour for this sell-off and the failure of Sinn Féin to vote against it will be very disappointing for many.”