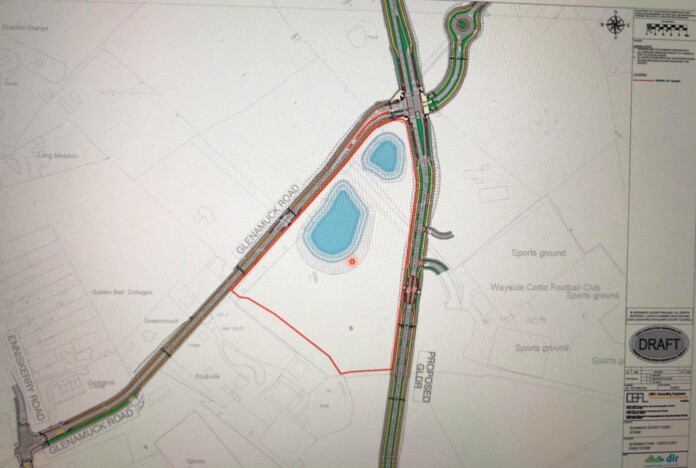 Development of new public park in Glenamuck will begin 2023

The park, which will be located between the Glenamuck Road and Wayside Celtic Football Club, will be developed alongside the GLDR, if plans are approved.

“A local park for the Kilternan-Glenamuck area is really welcome news.

“I continued to highlight the lack of any public open space for this area, and it became even more apparent since the start of the pandemic.

“We all need a space where we can escape to and enjoy exercise and fresh air away from the noise of traffic,” she said.

Plans for the park show that it is projected to be 3.25 hectares in size and the two attenuation ponds that are currently located on the land will be retained and transformed into water features.

“It is also proposed to have a kick about pitch, a playground and I would also like to see a cycling track so kids can hone their skills before heading up the mountains,” says McCarthy.

“Dun Laoghaire Rathdown will have plans ready to go to public consultation during Easter and I’m looking forward to hearing lots of good ideas from people in the area.”

However, two controversial electrical pylons that were installed on the site will remain, says McCarthy – after a lengthy dispute with Eirgrid.

“It was a huge disappointment,” says McCarthy.

“In spite of ongoing negotiation between Dlr and Eirgrid for almost two years, Eirgrid refused to underground the 220kv overhead powerlines which will transverse this park.

“Play areas will be designed away from the powerlines,” she says.

According to Dun Laoghaire-Rathdown County Council, plans for the park will be put to public consultation in the coming weeks, before planning permission is submitted.

If approved, construction on the park may take up to two years to begin, as it coincides with progression of the road scheme.

“The proposed new Glenamuck Roads will commencing early 2022, producing approximately 23,000 cubic meters of material which will be used to form the park allowing landscaping start in 2023,” McCarthy says.

More details of proposal will be revealed by the council when the public consultation process is formally launched.