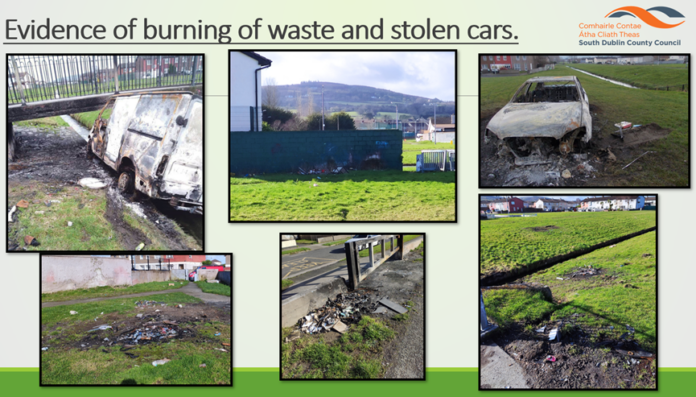 Council trying to tackle illegal dumping and fires in Jobstown

Anti-social behaviour, illegal dumping and the burning of waste on green spaces in Jobstown were the topics of discussion at the recent Tallaght Area Committee meeting.

In a presentation given to local councillors, senior engineer for the local authority Leo Magee said that the problems arising on green spaces adjacent to the Whitestown Stream need to be addressed.

“The issues of illegal dumping and burning of waste, the illegal operation of scramblers and the driving of stolen cars in the green spaces adjacent to the Whitestown Stream in Jobstown have been raised many times over the years by local elected members,” he said.

Between February and March of this year, South Dublin County Council found four sites of large-scale illegal dumping or the burning of waste in the area – all located near the Whitestown Stream.

Recently, a burnt-out stolen car was also found in the stream.

Magee says that the South Dublin County Council Drainage section carries out “weekly clean ups of the area, removing all types of dumped items from the stream itself.

It was revealed that over 100 clean ups are carried out by the council each year in the area while between 60 and 80 tonnes of waste is removed.

“SDCC litter wardens respond to a large volume of litter and dumping complaints relating to the area,” said Magee.

“Reports of burnt-out cars disposed of in the stream – these have the potential to cause pollution of the watercourse and ultimately the lakes in Sean Walsh Park and the Dodder River downstream,” he said.

Solidarity councillor for the area Kieran Mahon says that progress on addressing these issues is long overdue.

“This is the first time we’ve seen a report that takes an overview of the whole area along the Whitestown Stream at Jobstown,” he says.

“It’s an area that should be a natural recreation area for thousands of people from the neighbouring estates.

“It is a key link for Cloonmore, Bawnlea and Dromcarra to the wider area and to local services.”

As part of the solution, Magee says that boundary walls and access points to the green spaces need to be re-developed.

“Domestic property boundaries which are adjoining the low stub wall around the Whitestown Stream green space will require examination and a solution.

“Pedestrian entrances from within housing areas leading down to the Whitestown Stream green space will also require examination and a solution (for example at Bawnlea Drive),” he said.

Overall, there are 20 pedestrian access points to the area, all of which “have the potential to allow access for scramblers.

“These will all require closer examination and a method of treatment identified.”

Mahon says that while the suggestion of re-examining entrance points to the green areas is welcome, the council needs to widen its scope in order to tackle the problem.

“The council report so far focuses on access points and illegal dumping.

“It’s a welcome first step but we need to go further and understand the complete lack of investment or a plan for the area over decades,” he says.

“Residents have been done a huge dis-service with the privatisation of waste and that is visible in the immediate environment.

“The council remove rubbish from the stream and greens on a regular basis but the current approach to bins and the lack of large item collections is clearly not working.

“We need to move away from pointing at the actions of a tiny minority.

“We need to engage with them, but more focus has to be on the right of the entire community to a clean environment and good local services.”

Other issues such as graffiti on boundary walls and domestic properties, problems with streets lighting and footpath surfacing were raised during the presentation.

However, Magee says that funding for the works is not yet available.

“There is currently no provision either in the revenue or capital budgets for a programme of works to address these issues.

“It is intended that this process will lead to agreement on a set of measures which can be costed and considered through the budgetary process later in the year.”

Mahon says that the required funding would not be extravagant in comparison to other, similar projects.

“Around €2 million has been committed to transform the much larger area at Killinarden Park so a relatively small investment could transform the area at Whitestown Stream in Jobstown,” he says.

“There is barely a tree or plant in the half mile stretch. The area is barren and needs to be taken back for community use.”

The next step, Mahon says, will be a council proposal presented to Tallaght councillors on how best to proceed.

“We also expect the council to come back with projected costs in the coming months.

“These are basic but important steps that will have to be built on,” he says.

“At this point there is agreement among many of the Tallaght councillors that this is an important project and that action is needed.

“We’d encourage people to contact the Council and  local Councillors from all parties and keep this on their agenda.”