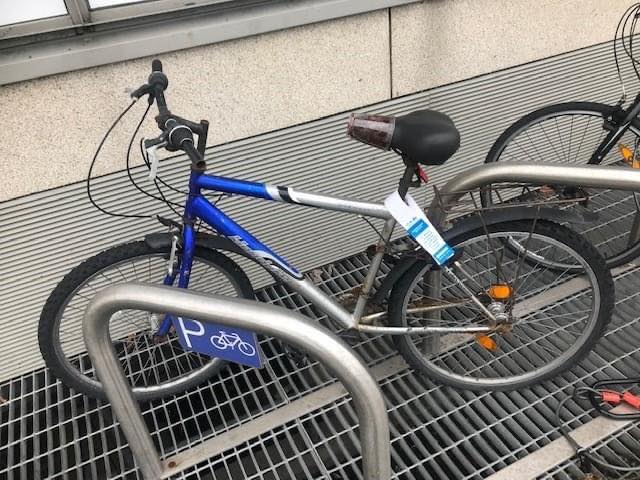 Dun Laoghaire-Rathdown County Council is beginning to remove and dispose bicycles that are deemed to be abandoned around the county.

Under the Litter Pollution Act, local authorities can remove bicycles from public areas that are abandoned and are causing a hazard or are in a bad state of repair.

Bicycles will also be declared abandoned even if it is not causing a hazard or in a bad state of repair if they are left for a long period of time in a bicycle parking space.

The council says that a bicycle may be deemed abandoned if it meets one or more of the following criteria:

o If a bike has not moved in two weeks (14 calendar days) or more and it is
reasonable to assume the bike has been abandoned by its owner.

o It is secured in a dangerous manner such as causing an obstruction on
public space.

o It is secured to a council cycle parking stand, traffic pole or railing and is
considered to be unroadworthy.

o When it is reported by a member of the public and assessed as being
unroadworthy or in a dangerous position.

Once a bicycle is determined as abandoned by a council official, a tag will placed on the bike.

The tag will indicate that if the bicycle is not removed within two weeks, it will be removed by the council.

The date of removal will be marked on the tag and the location of the bike will be noted.

The council says that “if there is anything about the bike that identifies the owner, the county council will attempt to contact the owner and advise them that their bike is deemed to be abandoned and will be removed.

“It is recommended that bike owners consider registering their bikes.”

After two weeks, if the bicycle has not moved, a county official will cut the lock and remove the bicycle.

Once a bicycle has been removed the council will store it for a further two weeks at the Ballyogan depot on Ballyogan Road, Dublin 18.

The owner then has two weeks to claim the bike with proper proof.

“The cut lock will be kept with the bike to help establish proof of ownership if
someone comes to claim the bike within the two-week period,” says the council.

“The owner will be required to provide the key to the lock as proof of ownership.

“After this period the bike will be recycled as scrap metal or donated to a recognised charity or to a relevant social enterprise or similar.

“As part of the procedure, a database will be established to track bikes,” it says.

The council says that if a person claims ownership of a removed bike, they will be asked to provide proof of ownership such as providing a description of the bike (i.e. make, colour, model, serial number etc) and details of where the bicycle was left.

The claimant will also be asked to present the key for the lock attached to the bike.

If an individual cannot provide this information within one week the bike will not be released.

The council says that not compensation will be given for a removed bicycle.

For more information, to declare a bicycle as abandoned or to claim a removed bicycle please contact info@dlrcoco.ie or call (01) 205 4700.