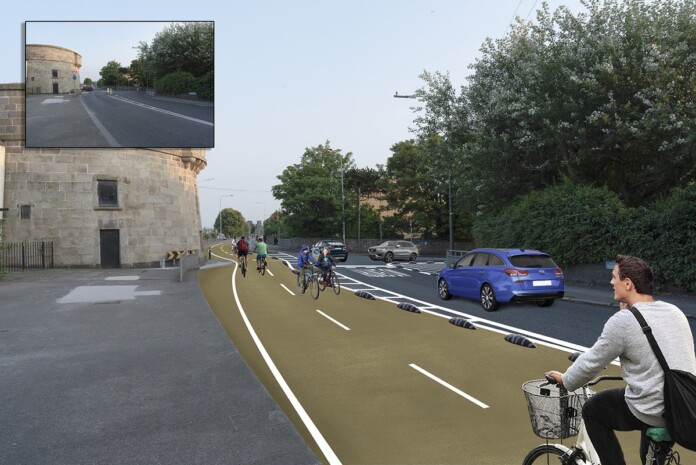 Sandymount residents have welcomed the passing of an emergency motion at the Dublin City Council South East Area meeting calling on the Minister for Transport Eamonn Ryan to amend the proposed cycle route along Strand Road.

The new proposal, which was originally drawn up in 2015, would see the cycle path constructed on the boardwalk on the coast side of Strand Road instead of the currently proposed route which would be developed on the road.

The new route is proposed by Dublin City Council (DCC) and would see the closure of the north bound traffic lane.

“Whilst we are acutely aware of the precarious Covid situation the country is now in, the Strand Road Cycle Route cannot be considered an emergency measure,” the collective says.

“We are not supposed to be leaving our homes bar essential journeys; schools and workplaces are closed; there is a 5km travel limit and Strand Road is not on desire lines, the parallel routes along Merrion Road and Park Avenue are more direct north / south.”

Dublin City Council’s traffic models predict that around 7,500 vehicles will be displaced per day if the cycle lane is introduced with the closure of the northbound lane on Strand Road.

The groups say that “despite repeated requests, Dublin City Council has not addressed the question of where these displaced vehicles will go.

“Modelling data provided by the National Transport Authority shows the trial will cause a traffic increase of up to 114% on Merrion Road, Sandymount, Ballsbridge, Irishtown, and parts of South East Dublin.”

The collective say they would “sincerely ask that Dublin City Council re-engage with the NTA and Minister Ryan to make it possible so it can be enjoyed by everyone including visitors to our wonderful capital city.”

“We believe that the DCC proposal as presented requires planning permission given its scale and its cumulative effect on the Sandymount, Ringsend, Irishtown and Ballsbridge communities.”

At a meeting of the DCC Community Consultation Strand Road Cycle Trial Forum on Thursday, January 7, the STC community group told Lord Mayor of Dublin Hazel Chu and management of the council that it is seeking a section five referral to An Bord Pleanala to adjudicate on the proposed cycle route.

A section five referral will decide if the DCC proposed cycle route is exempt from planning permission.

The residents groups are calling on DCC and National Transport Authority (NTA) to delay the trail period of the cycle route until the matter can be adjudicated by An Bord Pleanala.

By Brion Hoban A man who sold the details to his bank account which was then used to launder €10,000 has avoided a jail term...
Read more
Southside

An Bord Pleanála has given approval for the construction of a seven-block apartment complex at Golf Lane, Carrickmines. The proposal, submitted by Bowbeck DAC, consists...
Read more
- Advertisment -