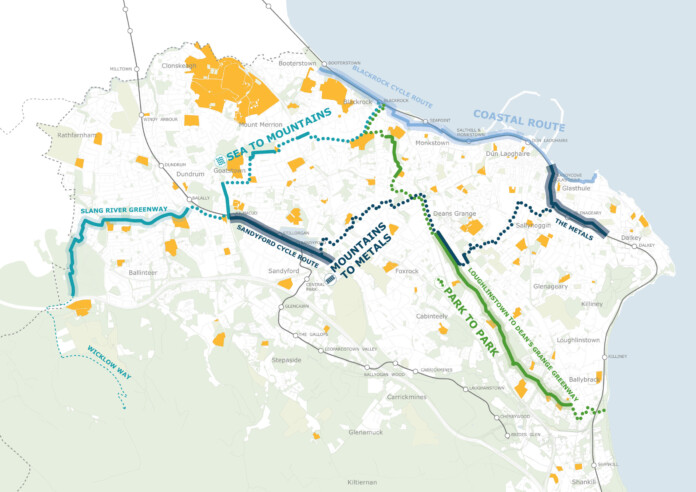 PLANS for three safe walking and cycling routes in South County Dublin are causing concerns for some local residents.

As part of the Active School Travel Initiative, Dun Laoghaire Rathdown Council last month launched public engagement on the pilot routes to connect the current walking and cycling network in the county.

Submissions on the proposed new routes must be lodged with Dun Laoghaire Rathdown County Council by Friday, November 6.

The three routes will be welcomed by cyclists and walkers but are already causing major concern among some locals as the routes will use what are shown on the maps as “quiet residential areas”.

The Mountains to Metals route will link east west across the county.

Starting at the Sandyford Cycle Route, linking to the Sea to Mountains Route, the route also links up to the Park to Park route, north through residential areas and new developments and on to the Metals.

The Sea to Mountains route will link east to west across the county.

Starting at Blackrock DART Station, and crossing the N11 to Deerpark, it will then continue south, linking to the Sandyford Cycle Route and Kilmacud Luas Stop before going on to the Slang River Greenway and Wicklow Way.

The Park to Park route will link north to south across the county.Starting at the coast at Blackrock DART Station it then joins the existing pathways in Rockfield Park.

From there it will continue south along Deansgrange Road, linking the Loughlinstown to Deansgrange Greenway and ending by linking south to the coast.

According to the council: “The proposed routes aim to connect quiet residential streets with existing safe walking and cycling infrastructure, to create a joined-up network.”

However, residents’ groups have expressed shock that quiet neighbourhoods with young children and elderly residents could be negatively impacted by the new proposed routes.

Glenageary Woods Residents’ Association has called on the council to engage in much wider consultation and to extend the date for submissions.