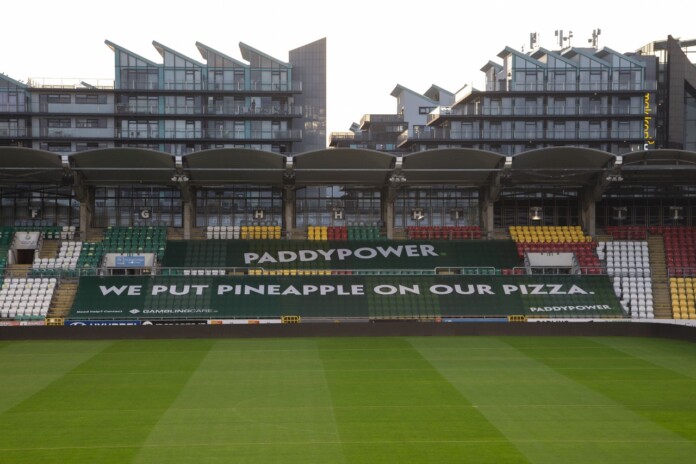 Milan to be given a cheeky welcome to Tallaght stadium

AC MILAN’s superstars will be given a ‘warm’ welcome to Ireland tomorrow as the stands at Tallaght Stadium are emblazoned with tongue-in-cheek taunts from Paddy Power as they take on Shamrock Rovers.

The bookmakers’ messages include ‘We put pineapple on our pizzas’, ‘Go home to your sexy cars’ and ‘The only Italian we fancy is a Macari’s’, as they seek to give underdogs Rovers a boost against the Serie A giants.

Rovers remain outsiders for the Europa League glamour tie – the biggest club game in Ireland for years – with Milan heavily odds-on (1/18) to win the match.

Stephen Bradley’s men are 22/1 to create one of the biggest shocks in recent European football history, and 9/1 to force a draw.

Spokesman Paddy Power said: “For Shamrock Rovers to play such a big game behind closed doors, without their fans, is a shame as they’re so important to the team. We wanted to do what we could to support the club and create a unique Irish atmosphere for both the fans at home and as a ‘welcome’ for the Italians.

“I’m not even Italian, and the idea of pineapple on pizza makes me wince, so we’re considering this an early advantage for Rovers. Let’s hope it lasts.”

Facebook
Twitter
Pinterest
WhatsApp
Previous articleRenewed appeal for information on the disappearance of Philip Cairns
Next articleCouncillors approve €260,000 in grants to community groups and projects in Fingal