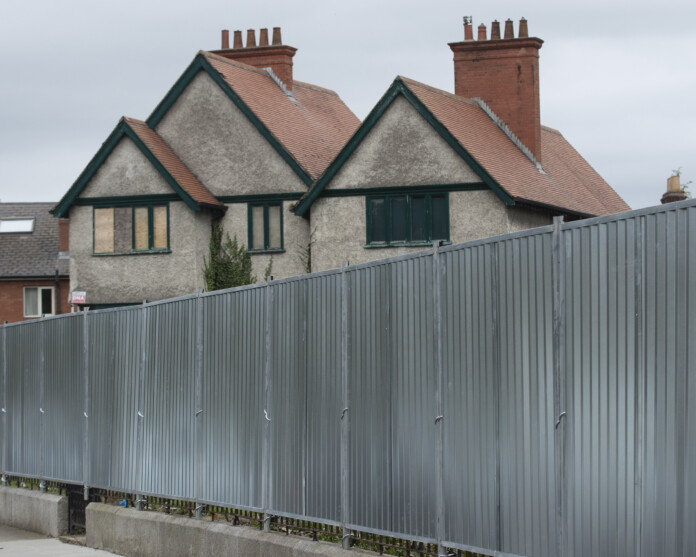 Anger over planned demolition of former home of 1916 leader

An Bord Pleanála has approved the demolition of the former home of The O’Rahilly, the only leader killed in action during the 1916 Rising.

The demolition of the house at 40 Herbert Park, Ballsbridge has been approved in order to make way for an apartment and hotel development of up to 12 storeys on the site.

Derryroe Ltd applied to An Bord Pleanala under the Strategic Housing Initiative for the aparthotel extension and 105 apartments facing Herbert Park.

The approval comes despite strong opposition from many residents’ associations, city councillors and the Department of Culture and Heritage.

On Friday protesters gathered to demonstrate against the planned demolition.

He says that the decision was announced just days before his motion to preserve the house is due to be voted on at the monthly meeting of Dublin City Council today.

“The decision by An Bord Pleanála to allow the demolition of this historic house is absolutely scandalous,” Councillor Mac Donncha said.

“40 Herbert Park was the home of The O’Rahilly and its threatened demolition is yet another insult to the men and women of 1916 and the struggle for freedom.

“My motion to add 40 Herbert Park to the list of protected structures is due before Dublin City Council this coming Monday 14 September.

“I informed An Bord Pleanála of this and requested that they postpone their decision pending the outcome of the vote on my motion.

“They claimed that they could not do so, which I do not accept.

“Then today I learned that the decision was made on 8 September with notices issued on 9 September, well before the due date.

“The question now is will The O’Rahilly home still be standing by the time my motion is put before the Council next Monday?

“Will the Minister for Housing, Local Government and Heritage Darragh O’Brien intervene and officially recognise this building as a National Monument?

“Or will yet another part of our heritage be reduced to rubble? It is bitterly ironic that this demolition comes courtesy of the FF-FG so-called ‘strategic housing’ legislation which has failed to provide the housing needed but in this case allows the demolition of a most historic building to make way for luxury apartments.”

Fianna Fáil Councillor Charlie O’Connor has expressed his concerns about the rising Covid-19 cases in Tallaght.  Councillor O'Connor is a member of the Regional Health...
Read more
Northside East

With the help of Hollywood hero, Colin Farrell, Special Olympics Ireland is asking the public to lend their support and help raise half a...
Read more
Southside

A DECISION by Dublin city councillors to place the former home of a 1916 Rising leader on its list of protected structures has been...
Read more
- Advertisment -

OVER 500 checkpoints were conducted over the weekend in Dublin and surrounding counties under Operation Fanacht, gardai have revealed. Following a Government decision in relation...
Read more

GARDAI are seeking the public's assistance in tracing the whereabouts of 58-year-old Patrick O'Shea, who was last seen in the Dublin 7 area on...
Read more

Another 103 new cases of Covid-19 confirmed in Dublin

A TOTAL of 103 new cases of Covid-19 have been confirmed in Dublin. The Health Protection Surveillance Centre has today been informed that two people...
Read more

Fianna Fáil Councillor Charlie O’Connor has expressed his concerns about the rising Covid-19 cases in Tallaght.  Councillor O'Connor is a member of the Regional Health...
Read more
Load more