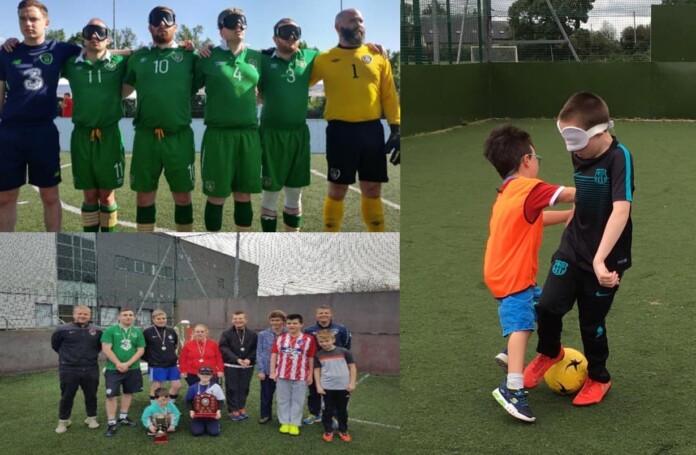 BOHEMIANS Football Club are launching their first Blind Football Academy in conjunction with the FAI and Vision Sports Ireland and will be one of three regional training centres across Ireland that promote and support the growth of grassroots blind and vision impaired football.

“We’ve had this idea for a while now and been planning for over two years.

“We approached Bohs to get involved and they straight away said no problem.

“We are planning to get a centre in each province, and we’ve had one in Cork for a while now and Cork City FC got involved and they helped us out by providing coaching.

“The relationship worked well, and we thought why not try to do the same thing in Dublin and with me being a Bohs fan it made sense to approach the club. Bohs Access Officer, James Flanagan was involved in the club’s move towards including vision impaired fans alongside NCBI with their Audio Description Football programme, so it was a no brainer to go to him.

“So the more clubs that get involved the better it is for Blind Football.”

Alex’s work in Blind Football has been a learning curve that has informed him of the work still to be done if Ireland is to catch up with other countries around the world.

“We’re miles behind here in Ireland. We only set up our first team about 8 years ago and in other countries it’s been a sport for a while.

“The UK has had Blind Football for 40 years and a lot of other large European countries have had teams for quite a while.

“In 2017 we were given international status by the FAI, so we have a world ranking of 36 now. We’ve played in international tournaments in Romania, Belgium and Poland.

“We have players that represented their country in Blind Football and they’ve received caps, the same kind of caps Robbie Keane would’ve got in his playing days, so we have a team.”

Despite the fledgling nature of Blind Football in Ireland, Alex has been dedicated to improving the structures to support the sport and takes every opportunity to try and improve upon what has been learned so far by studying what other countries are doing.

“There isn’t exactly a manual for Blind Football so everything that we do and that I’ve done since I’ve been the head coach, have been adapted from mainstream football into Blind Football.

“A lot of the stuff we do is going to these tournaments and looking at how people do things.

“We were at a tournament in Romania and we looked at the way Greece defended. They defended with intensity and they pressed high but always had cover in behind and this triggered my mind to try and emulate that and copy the intensity, so we’re always looking at things we can bring in and change.

“In 2019 I had the pleasure of going to Brazil. Brazil are the number one Blind Football team in the world.

“We were there for ten days it was an eye opener because you get see and learn what the Brazilian coaches do, and you realise that’s the standard we need to get to one day. It made us see we’ve an awful lot to do if we’re going to reach that level.”

As with any sports venture, recruitment is paramount and Bohs Blind Football Academy is open to new players of all ages and abilities who want to take the chance to advance the sport in Ireland and be part of an exciting future.

“I see the future in two ways.

“One is recruitment. We’re always looking for new players. If the players get better, the team’s going to get better, coaches will get better and that’s what we’re looking for.

“If you’re asking about end goals, I think the real highest standard of Blind Football is the Paralympics.

“That would be the dream but in order to do that you’ve got to be in the top two in Europe.

“But again, it is a young sport in this country so hopefully we can reach that goal somewhere down the line.”

Anyone interested in being involved with Bohs Blind Football Academy can email accessofficer@bohemians.ie