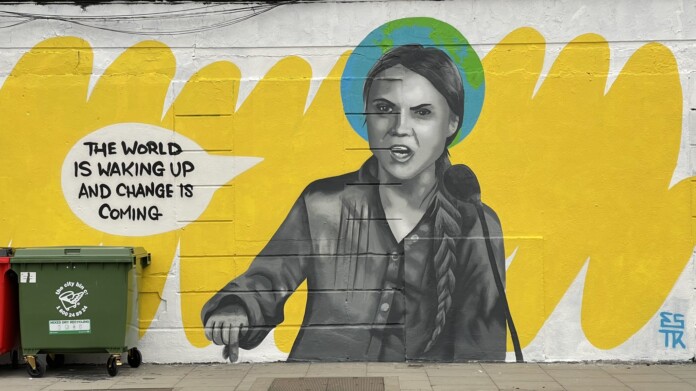 A mural in Smithfield of Swedish climate activist Greta Thunberg has been repaired after it was vandalised only 24 hours after being painted.

The painting, by artist Emma Blake, is located on the side of a building on Chancery Street and depicts Thunberg with the words “the world is waking up and change is coming” written in a speech bubble beside her.

Photos of the mural were shared on social media yesterday showing the vandalism – the words “Slut X George Soros Slut” written across her.

The mural is part of a series of murals by Blake: which includes figures such as Bernie Sanders (next to the Thunberg mural); musicians such as Sinéad O’Connor, Lizzo and Post Malone; and anti-racism murals, including one dedicated to George Floyd.

Green Party MEP, who shared the images online, said: “It is appalling that the mural has been vandalised. Hopefully it can be repainted, and I’ve reached out to the artist to help if I can,” Cuffe said.

“Climate change is real, and we all need to take action,” he said.

The mural has since been repaired by the artist.