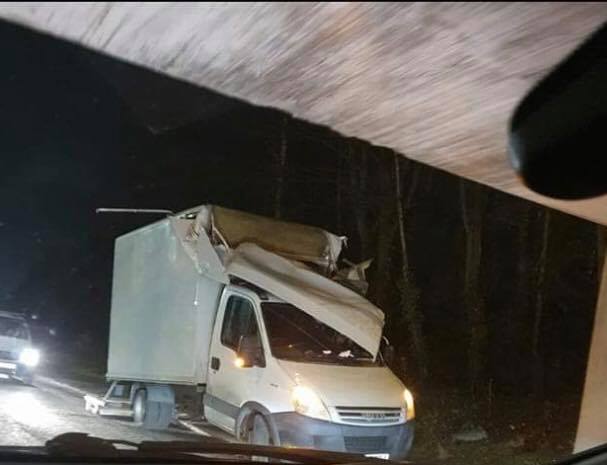 An electronic warning sign has been installed at “Ireland’s Most Battered Bridge” in Mulhuddart – but not before it claimed another victim.

On December 15, a large van struck the low hanging bridge on Blakestown Road, making it one of many large vehicles to not clear the infamous bridge in recent years.

Numerous incidents have occurred at the bridge since its construction with Sinn Fein TD for the area, Paul Donnelly saying the bridge has “been struck dozens of times by trucks,” and needed to be addressed.

After the most recent collision an electronic warning sign with the height of the bridge has been installed before the entrance, in an attempt to warn off lorry, bus and van drivers.

In an online post, Deputy Donnelly said: “At long last, the council have finally put in new safety measures, an electronic sign, that should be enough for drivers to warn them not to proceed!

“Sinn Féin have been fighting for additional safety measures for several years at this spot so this is very welcome news.”

A Facebook page dedicated to the bridge, called “Ireland’s Most Battered Bridge,” has been posting about the numerous accidents since 2019.

“A huge thank you to Paul Donnelly TD and Sinn Fein Cllr Aaron O’Rourke who constantly lobbied Fingal County Council for new road traffic safety measures to be installed in our area.

“It only took about 20 crashes for them to listen. Thank you,” it said in a post.

In July, a lorry driver collided with the bridge as did a truck in May and February.

The most serious incident at the bridge occurred last year when 10 school children had to be taken to hospital after a bus they were travelling in hit the bridge.

The group of second and third-year students from Blakestown Community School in Mulhuddart were on an educational trip to a local mosque when the accident happened. Fortunately, there no serious injuries.

Facebook
Twitter
Pinterest
WhatsApp
Previous articleMan stashed over €17,000 worth of cannabis in washing machine
Next articleMan arrested after threatening shop staff with gun on Dorset Street