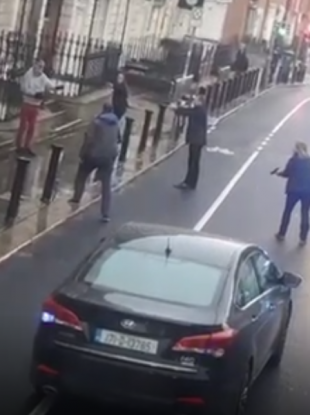 Armed Gardaí arrested a man in Dublin city yesterday after a man was accused of pulling a firearm on a shopkeeper.

The incident took place on Dorset Street at about 3:10pm when a man in his 50s was accused of producing a gun and threatening staff, Gardai say.

Armed gardaí were dispatched to the area and the air support unit was deployed.

It is understood that no staff were injured in the altercation and managed to leave the scene safely.

The man in the 50s also fled the scene and was located by officers on Frederick Street.

A video, taken from a nearby bus, shows several gardaí approach the man with their weapons drawn. He is then brought to the ground and detained.

A garda spokesman said: “A standoff lasted for a short time until the man was eventually disarmed and arrested by gardaí.

“He was later taken to Mountjoy Garda Station where he currently remains detained under Section 30 of the Offences against the State Act, 1939.

“No shots were discharged during the incident and no injuries were reported. The firearm produced was later discovered to be an imitation.”