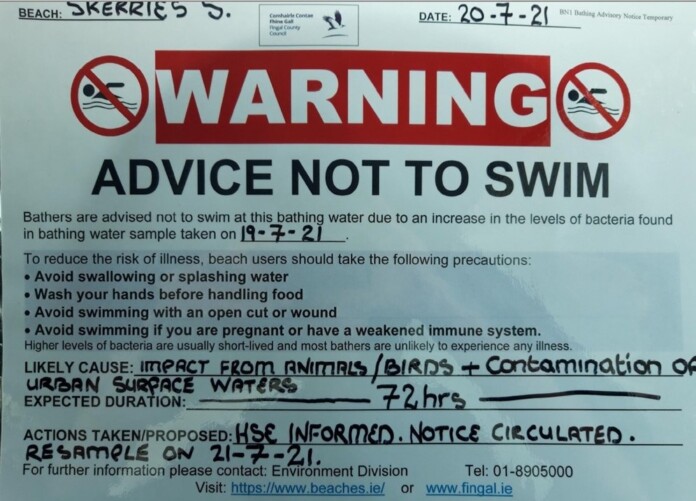 Do Not Swim Advisory Notice issued for South Strand Skerries

A Temporary Advisory notice not to swim has been issued for South Strand Skerries.

Bathers are advised not to swim at this location due to an increase in the levels of bacteria found in a bathing water sample taken on Monday, July 19 and following consultation with the HSE.

Preliminary e.coli results were higher than the acceptable limit.

According to the council the likely cause of the higher than normal levels of e.coli is the impact of animal and birds as well as contamination of urban surface waters.

Higher levels of bacteria are usually short-lived and most bathers are unlikely to experience any illness.

The full results, including enterococci rates, are due today from the samples taken on Monday.

A resample has been scheduled for Skerries South Strand tomorrow.

The Advisory Notice, which has been posted at the South Strand, states that to reduce the risk of illness, beach users should take the following precautions:

South Strand Skerries remains open but beach users are asked to respect the advisory notice as it has been put in place to ensure that the health of bathers is not compromised.

Members of the public intending to enter the water at any beach in Ireland are advised to check the water quality in advance by accessing the EPA website at www.beaches.ie or by checking the notice board at the entrance to each beach.