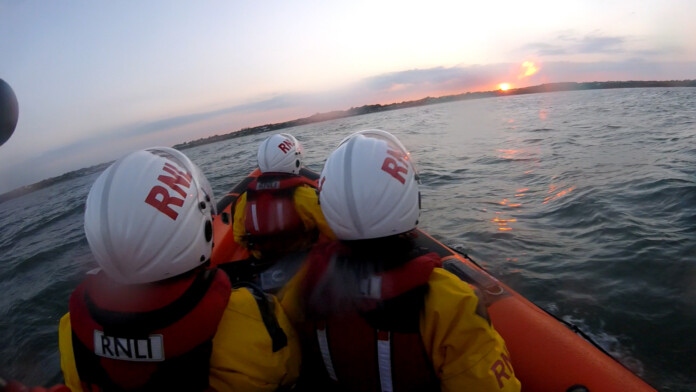 Skerries RNLI volunteers launched their Atlantic 85 inshore lifeboat “Louis Simson” shortly after 9pm on Monday night following a 999 call to Dublin Coast Guard reporting that a number of members of the public had spotted several red distress flares between Loughshinny and Lambay island.

The lifeboat rounded the headland at Red island and navigated towards the general area indicated by the callers.

Once on scene a search of the immediate area was quickly carried out. With no obvious signs of any vessels or persons in distress, a search of the shoreline from Loughshinny to Rush was then conducted.

With nothing found the lifeboat was proceeding towards Lambay island to carry out a search further out to sea when they received an update that Skerries Coast Guard unit were speaking to a person who was flying a drone in the area.

The drone operator confirmed that he was operating in the area the flares were reported at the time the 999 calls were received.

With this information and with a search not finding anything, Dublin Coast Guard were satisfied that it was a false alarm with good intent and the lifeboat was stood down and returned to station.

The lifeboat and station were deep cleaned, sanitised and made ready for the next call out.

At the time there was a force three to four northerly wind with a moderate sea swell and good visibility.

Speaking about the call out, volunteer Lifeboat Press Officer for Skerries RNLI, Gerry Canning said: “We would always encourage the public to dial 999 and ask for the Coast Guard if they think someone may be in trouble on the water. Thankfully in this case it was a false alarm with good intent. The crew did get to enjoy a magnificent summer solstice sunset on the way home.”