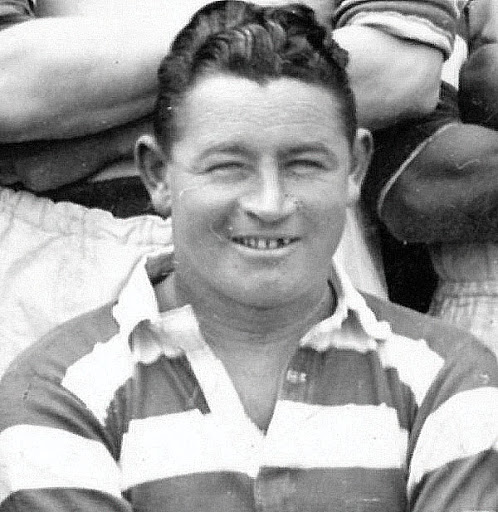 A plaque commemorating football legend Paddy Moore has been erected at his former home in Ballybough.

Ranked as one of the greatest Irish players of all time, he was undoubtedly also this country’s first superstar footballer.

Now his memory has been honoured on the wall of his family home ‘Meitheal’ on Clonliffe Avenue.

It was unveiled last Saturday April 26, which was the 90th anniversary of Ireland’s first international with Spain and also Paddy’s debut. He scored in a 1-1 draw.

Born in Dublin in 1909, he had a stellar career which saw him become the first player ever to score four goals in a World Cup match, win every honour in Irish club football, score the winning goal in the 1931 FAI Cup final and represent his country 9 times.

The club closest to his heart was Shamrock Rovers who he played for during four different spells spanning almost the entire 1930’s.

He also played in England, Wales and Scotland becoming a legend at Aberdeen where he equalled the club record for scoring a double hat trick in 1932.

Had he been born 80 years later he would undoubtedly have been a multi-millionaire and a back page tabloid star.

He would also probably be making the front pages because along with his spellbinding talent he was a larger-than-life cult hero who was much loved by the public and a man who struggled with an alcohol addiction that would tragically claim his life at the age of 41.

He has been described as second only to George Best as the greatest ever Irish footballer.

Both men’s lives would have sad overlaps.

His first spell with Rovers was short.

After beating Bohs to his signature near the end of the 1928-29 season Rovers decided to convert him into a striker.

It was an inspired switch and he didn’t have to wait long to win his first bit of silverware as his goals helped the club win the Free State Shield.

His stunning performances had alerted many cross-channel clubs and that summer he signed for Cardiff City along with another Paddy Moore who came from Mullingar Celtic!

Neither man got a chance to shine and after a frustrating season in the Welsh capital Paddy moved to Merthyr Town where he only played 5 games before moving to Tranmere Rovers.

His stint on Merseyside didn’t last too long either and by the end of the summer of 1930 he was back at Rovers.

The next couple of seasons would be very productive for both him and the club as they won the league and cup double in 1932.

Once again he appeared on the radar of the leading British clubs and it was Aberdeen who won the race for the much coveted Dubliner.

He was signed as a direct replacement for Benny Yorston, the man who to this day is still Aberdeen’s record goal scorer with his haul of 38 goals in the 1929-30 season.

Yorston, along with five other players, had been let go by the club after a betting scandal known as “The Great Mystery.”

By this stage he was also playing for his country after making his debut, and scoring, for the “Free State” in a 1-1 draw against Spain in 1931.

A year later he became one of the few players to play for both Ireland and Northern Ireland when he was picked on a combined team to play England in Blackpool.

An article from the Irish Independent dated October 11th 1932, five days before the game, raves about Moore’s ability and how he was one of “only four Free State born men in the team.”

The article goes on to say;

Another writer starts off “Be thankful gentlemen for the entry of one Patrick Moore, an Irishman by birth, an Aberdeen player by choice and a football personality by nature,” read the piece.

Two years later comes the monumental clash with Belgium in Dalymount when he becomes the first player ever to score four goals in a World Cup match.

The game was Ireland’s first ever World Cup Qualifier and the headline in the Irish Press the day after read; “PADDY MOORE SHARES THE HONOURS WITH BELGIUM.”

The report says that “only Paddy Moore could have scored four goals, each of them was a masterstroke of precision and timing. The game was in the nature of a personal triumph for him.”

Following this wonderful feat he was propelled to almost God like status in his home town.

Exiled in Scotland, his time at Aberdeen was successful, in his three seasons at Pittodrie he scored an impressive 47 goals in 74 games.

While at Pittodrie however it appeared he suffered terribly from homesickness.

From scanning old newspaper reports from the 1930’s a picture emerges of a larger-than-life character who played from the heart.

In an interview he did with The Irish Press dated 11 January 1935, when he was playing for Aberdeen, he talks of how much he loved and missed his home town.

“I’d be much happier if I was back playing in Dublin,” he says to the correspondent known only by the name “Socaro.”

It appears he had still not made it back to his club after an international versus Hungary in Dublin on 16th December, almost four weeks earlier!

“Nothing would suit me better than to resume playing in the Free State,” he said.

“I put on weight very rapidly whenever I’m in Aberdeen, I feel a new man in Dublin and I find life at home much better for me.”

He rejoined Shamrock Rovers within weeks of giving this interview.

During his last two spells at Rovers he battled alcoholism but he still managed to help the club win trophies and produce some memorable moments on the pitch.

Ultimately his career wound down in 1942 and following a short stint as manager at Stella Maris he emigrated to England where he tragically died in 1951 aged just 41.