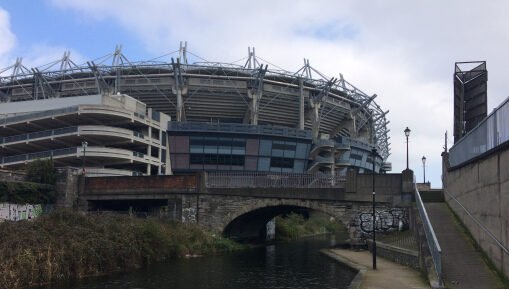 Bridge at Croke Park to be named “Bloody Sunday Bridge”

Dublin City Councillors have voted to rename a bridge beside Croke Park as “Bloody Sunday Bridge” in memory of the 14 civilians killed by British forces in the stadium 100 years ago.

The motion was put forward by Cllr. Nial Ring and Cllr. Cieran Perry to rename the bridge at the Canal End of Croke Park from which the RIC/Auxiliaries/Black and Tans fired at the spectators and players at the Dublin v Tipperary football match on Bloody Sunday, 21st November 1920.

“It is very fitting that we decided to rename the bridge “Bloody Sunday Bridge” as we approach the centenary of that massacre of innocent civilians in Croke Park” Cllr Ring said after the meeting.

“The bridge was built many years after the Royal Canal opened and so was not named after one of the Royal Canal company directors like Newcomen, Blaquiere, Binns etc., so its name is not so well known.

“In fact, locally nobody really refers to its official name of Clonliffe Bridge but rather Jones’ Road or Russell Street Bridge.

“The process will now commence to get the renaming approved by the full council through the commemorative naming committee process and hopefully when crowds again go to Croke Park they will see and appreciate  “Bloody Sunday Bridge”, he concluded.

One of the victims, Joseph Traynor was picked up outside Croke Park by Joseph and Christopher Ring (Grandfather and granduncle of Nial Ring) and brought to their house nearby in Sackville Gardens, 200 yards from the Canal End, where he was laid on a table and helped.

However, the Ring family knew he was dying so brought him out the back lane and alerted an ambulance.

Joe was brought to Jervis Street hospital where he died an hour later.

Gardai are appealing for witnesses following an assault on a woman in Balbriggan on Friday evening. It is understood three male youths assaulted the woman...
Read more
Northside East

Howth Lifeboat Station continues to rely on voluntary contributions and legacies in order to provide its vital role. It is only through thoughtful gifts...
Read more
- Advertisment -