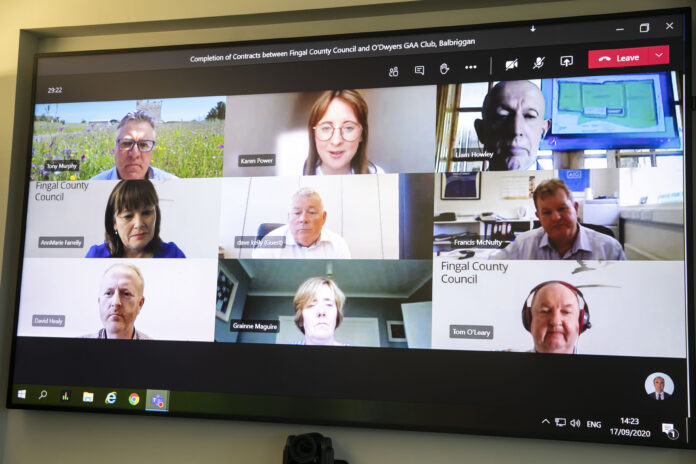 O’Dwyers GAA Club and Fingal County Council have completed the signing of contracts which will allow the club to proceed with its planned move to a new state-of-the-art facility at Bremore Regional Park in Balbriggan.

O’Dwyers have sold their facility at Hamlet Lane to the Council and taken a long-term lease for a 10 acre site on the northern boundary of Bremore Regional Park which it will now proceed to develop into a state-of-the-art sporting facility.

The Chief Executive of Fingal County Council, Ann Marie Farrelly (pictured below), completed the contract process when she put pen to paper during a virtual meeting involving club officials, council staff and councillors from the Balbriggan Local Electoral Area. 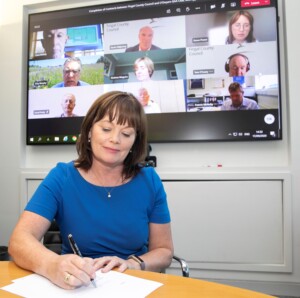 The meeting was held online to comply with Government measures in relation to COVID-19.

“The move to Bremore Regional Park will allow O’Dwyers to put in place the foundations for the next 100 years of its history and will also assist the club with the work it is doing for the youngest population in Ireland,” said Mayor of Fingal, Cllr David Healy.

In 2018, members of O’Dwyers agreed to move to a new facility at Bremore Regional Park and to sell their current ground at Hamlet Lane to the Council to facilitate road improvements and new housing in the area.

The club are planning to develop a new clubhouse, sports hall, sports pitches, parking and training areas at Bremore which will be in alignment with the council’s overall vision for the park.

Following the signing of the contracts, Ann Marie Farrelly said:

“We are delighted that we have now signed the contracts and look forward to seeing O’Dwyers develop a top-class sporting facility in Bremore.

“The rejuvenation of Balbriggan through Our Balbriggan is a key priority for the Council and the provision of better sports facilities across the town is very important.

“Sport has an important role to play in terms of physical and mental well-being, community integration and tackling social issues such as Anti-Social Behaviour.”

“It has taken a long time and a lot of hard work to get to this point and are delighted that we can now plan to commence construction and deliver this fantastic project.

“O’Dwyers is a fully integrated club, active in all areas of social and sports activities promoted by the GAA.

“The new facilities will allow us to better cater for our growing membership and increased number of teams. We are all very excited about delivering this project for the whole of the Balbriggan area.

“I would like to thank everyone who has helped get the project to this stage.”

Bremore Regional Park is a 100-acre facility in north Balbriggan along the R132 which is being developed by the council to support and service the outdoor recreational needs of the town’s young and rapidly growing population.

It will feature a major community and tourism hub focused around the restored medieval Bremore Castle and associated visitor services.

A range of sporting facilities will be provided including the already completed 3G All-weather sports pitch as well as at least six additional public grass pitches.

The latest weapon in Dublin's ongoing battle with litter will make it easier for Dubliners to recycle. This is after new bins have been installed...
Read more
- Advertisment -