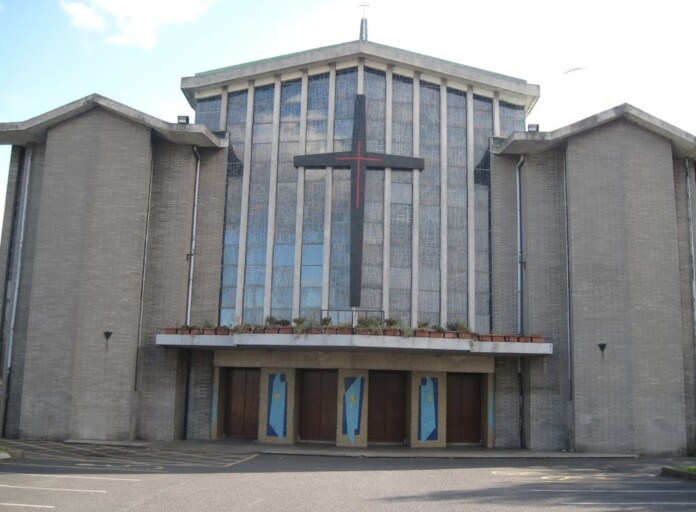 Demolition of landmark Church of Annunciation in Finglas begins

Demolition of the Church of Annunciation on Cappagh Road, Finglas began last week after months of delays.

The church, which was built in the 1960s during a building boom initiated by the then archbishop of Dublin, John Charles McQuaid, had a capacity of 3,500 parishioners and was one of Dublin’s largest catholic churches.

However, four years ago the church announced plans to demolish the building citing falling attendance numbers and the growing cost of maintenance.

It said that the concrete and steel structure was deteriorating to the point that it posed a significant safety concern.

In October 2018, Archbishop of Dublin Diarmuid Martin celebrated the final Mass in the church and an application was filed with the council in the following May for the demolition of the building.

In its place, a smaller, 300 capacity church will be built as well as housing for senior citizens with a senior care centre being developed on a nearby site called St Fergal’s Field.

However, the decision to grant permission for the work took more than eight months, following concerns raised by the council planners over the future use of the residual church lands.

Information on the senior citizens accommodation development was “sparse” according to the planners and more detail was sought before permission could be granted.

“Demolition started this week after much delay.

“We have been waiting on this for a number of years.

“I know it will be bittersweet for a lot of people given the history in the area and the connections families have to the church,” she told the Northside People.

“But the site was under-utilised, once demolished the new site will cater for a smaller church and senior citizens with a primary health care centre at the back.

“It will be a huge investment into Finglas West and is very much needed,” she said.

Sinn Fein TD Dessie Ellis said the church was “a well-known and much loved landmark for 50 years.

“I welcome Dublin City Council’s plans to develop senior housing on the site.

“This will help alleviate the housing crisis in the area by allowing DCC to buy up the houses of those senior citizens who would like to avail of the Senior Citizens Financial Contribution Scheme thereby allowing such houses to become available to accommodate families on the ever-growing housing list in Finglas.”