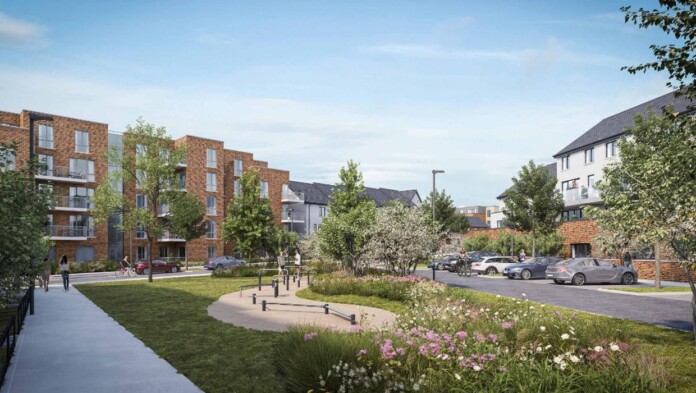 A planning application for the development of 1,365 residential units at a site at Corballis East in Donabate has been lodged with An Bord Pleanala.

The proposal, which is being progressed by Aledo Donabate Ltd, is filed under the Strategic Housing Development Act (SHD), which allows developments over 100 units to be applied directly to ABP, instead of the local county council.

The site that has been earmarked for the development is a 27.3 hectare piece of land north of the Donabate Distributor Road.

The plans also show three childcare facilities with a combined capacity for 297 children and space for five retail and two café units.

A number of parks and open spaces will also be provided, according to Aledo, who also say that pedestrian and cycle links to the nearby railway line will be developed in the future.

A new entrance to the site is proposed at New Road to the north-east of the site as well as a footpath from The Strand.

The development also facilitates the construction of a “primary school site on adjoining lands within the applicant’s ownership”.

However, the plans have drawn controversy from local representatives with councillor Adrian Henchy saying: “Would have very serious concerns and reservations regards this Strategic Housing Development application.

“Have been raising and will continue to raise this application with the Chief Executive and Planning department of FCC.

“If it’s not in compliance with the Donabate Local Area Plan will be opposing it in the strongest possible terms at every chance I get and will be asking the Chief Executive and my colleagues on FCC to also strongly support the Donabate LAP even if it means opposing this particular application.”

Local Labour party representative Corina Johnston said she was concerned and “taken aback at the extent to which this application is at variance with Donabate Local Area Plan and the County Development Plan.”

Johnston cites the density, housing mix, height and visual sensitivity of the development as areas concern.

“The number of material contraventions in this planning application may well make this process irrelevant and a waste of time in the future.”

In its application to An Bord Pleanála, Aledo Donabate Ltd said: “The recovery of the economy and increasing population and employment numbers (since the 2008 crash) have created a significant increase in demand for new homes to support a growing economy.

“Under-provision of housing is one of the remaining legacies of the economic downturn to be tackled.

“Accelerating delivery of housing for the private, social and rented sectors has been a key priority of the Government for the last number of years.”

The property developer has also committed to meeting legal requirements which will see 10% of the housing stock, 136 units, be handed over for social housing.

It says the overall cost of the scheme could reach over a billion euro when completed.

This proposal follows an agreed deal between Fingal County Council and Glenveigh Living Ltd to develop 1,200 residential units at Ballymastone, near Donabate.

The agreed deal will see the property firm develop the units with a tenure mix of 60% private housing, 20% private discounted housing and 20% social housing.

Every house or apartment delivered by Glenveagh Living Ltd will carry a minimum of an A energy rating.