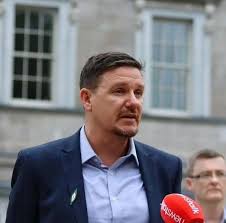 The Government must produce a fully resourced road map for mental health provisions, a Sinn Fein TD has said.

Sinn Fein spokesperson for mental health Mark Ward TD says his calls “come on the back of the impending announcement on restriction by the Government and as a result of two parliamentary question responses that show a drop in actual funding for mental health provision.”

“Later today the Government will make yet another announcement on restrictions during the pandemic.  The Governments need to realise that this is not a show, but it is real life.

“In addition to a clear and concise announcement I am again calling on the government to produce a fully resourced road map for mental health provision.

“One that puts resources in place to deal with the immediacy of this emergency alongside long term measures that will take us out of this crisis.

“The time for talk is over. Talk is cheap and action is needed.

“The public do not want pats on the back and platitudes saying that their mental health is being minded when the reality is different.”

“I received two responses to parliamentary questions that show how low mental health is on the Governments agenda.

“Additionally, the Government allocated €35 million each year from 2016 to 2019 for additional funding for its programme of Government.

“I am calling on the  Government to immediately  use some of the surge capacity in private hospitals for mental health.

“Alongside these measures provisions need to be put in place for systemic long-term change in how mental health services are provided for in this state.”

The mystery story of a Dublin born airman killed in World War II was finally solved with a little help from Dublin People. On July...
Read more
Dublin

The Irish Home Builders Association has expressed "deep disappointment" at the announcement from Government that the "unnecessary delay" to private home building activity is...
Read more
Dublin

By Brion Hoban A father-of-two who agreed to hold over €178,000 of heroin and cannabis because he needed money to pay for his father's funeral...
Read more
- Advertisment -