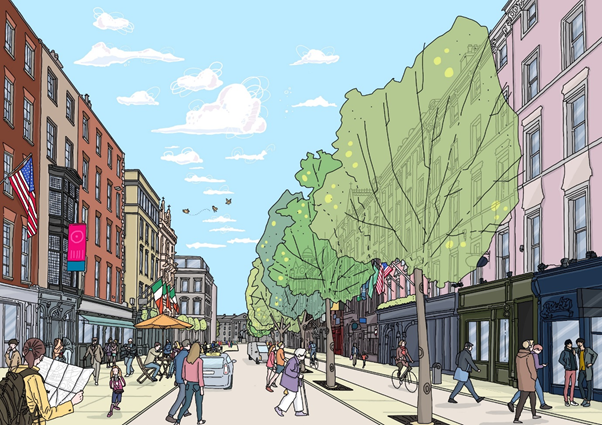 Public to have their say on future of city streets

DUBLIN City Council is proposing that several streets in the city centre are pedestrianised following successful trials some weeks ago.

These ‘Weekend Pedestrianisation Trials’ took place on five streets over six weekends during the months of July and August.

“But we are aware of opposing views from a number of retailers and there are also difficulties with accommodating access to existing car parks,” the council said.“Dublin City Council is now proposing that four streets should be either traffic-free, or have sections of them traffic-free, daily after 11am.”

“Dublin City Council is not proposing at this point in time to pedestrianise Duke Street,” the council added.

“We will now undertake a period of consultation to ascertain if there is broad acceptance of the proposals, especially from the business community and retailers in the streets where proposals for changes are being made.”

The Lord Mayor of Dublin, Cllr Hazel Chu, said she welcomed the plans but was “very disappointed that South William Street falls short due to Clarendon Street car park”.‘I have requested whole street be pedestrianised again for trial during Dec,’ she wteeted. ‘I would ask people to contact council to do same’.Meanwhile, the council has revealed that the public will also have a say on proposed improvements to Dame Street which are part of College Green project.

The Traffic and Transport Strategic Policy Committee has unveiled an ambitious plan to rediscover and reinvent the historic College Green as the major public space at the heart of the city.

Following on from an unsuccessful application to An Bord Pleanála in 2018, the council held a series of events in College Green including Summer Sundays, Culture Night and car free day. These were days and evenings when College Green was made available to the public without any traffic.

“The lessons learned guided us in both assessing what was previously proposed and in the preparation of a number of new options,” the council said.“The publication of the final Bus Connects Network design in September 2020 by the National Transport Authority shows an option for the bus network if College Green is made traffic free.

The consultation period will run until January 15 and all the required documentation has been available on the Dublin City Council consultation hub from November 5.

Ireland’s first music festival in almost 16 months with a capacity of 3,500 will be hosted by IMMA at Royal Hospital Kilmainham, in conjunction...
Read more
Dublin