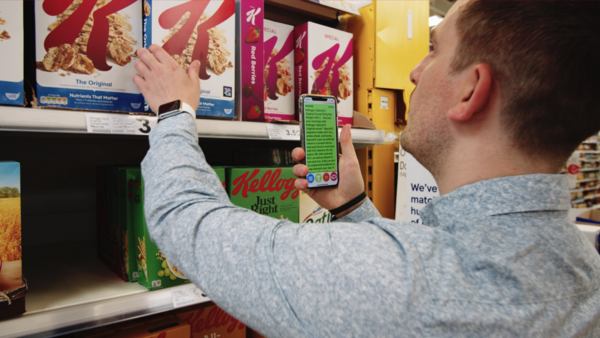 Kellogg’s lead the way for the visually impaired customer

GLOBAL cereal powerhouse Kellogg’s recently rolled out their visual impairment initiative across its entire range of products in a move designed to make shopping a more inclusive experience for people experiencing sight loss.

Implementing ground-breaking technology, Kellogg’s have partnered with RBNI in the UK and Spanish software company Navilens so that visually impaired users can use codes, without needing to know precisely where they are placed on packaging. Just scan with a mobile phone app and get the necessary information.

Spokesperson for RBNI, Mark Powell spoke with Southside People about how and why this initiative came to be and what its global roll out will mean for visually impaired people.

“The idea originally came from Kellogg’s,” he said. “They were working with St Vincent’s in Liverpool, which is a school for visually impaired children. The children said to Kellogg’s that they would love to see things more accessible in packaging and suggested to put braille on packaging.”

While the idea of Braille on packaging is helpful and already in use, Powell saw the chance to go further.

“Braille isn’t really used by blind and visually impaired children,” he explained. “In actuality around 10 percent of visually impaired people use braille and the children said they would love to see some technological support added to Kellogg’s products and that prompted the company to contact myself. We went on a journey and have been working for over a year with a firm called Navilens.

“Navilens is essentially the next generation QR code. It’s a colourful code that can be detected from a distance. The boxes of Coco Pops and the others that are being rolled out throughout Europe can be detected from three metres away and you don’t need to know where the code is. If you point it in the general direction of the cereal box it will pick it up.

“The technology has been around for a few years now. It’s active in Barcelona and Madrid at train stations where a code the size of an A3 page can be detected from 30 metres away. Kellogg’s announced two weeks ago that it would be rolled out for their whole cereal portfolio starting January 2022 and will be gradually introduced elsewhere.

“It was trialled by Kellogg’s last year with a limited edition box of Coco Pops and the response was overwhelmingly positive and people can’t wait to get out and use it across Ireland and the UK first.”

While Kellogg’s is a pioneer in using this technology on packaging, Powell hopes other companies will follow suit.

“I would welcome any conversation with any company who want to do this,” he said. “We’re passionate about this, we know what works and doesn’t work, we have been through the challenges but Kellogg’s have been very proactive from our perspective and we want to see other company’s doing this.

“Overall it’s been really well received and the most exciting thing for me is when we did the trial and actually saw the response from blind and visually impaired people saying ‘this is going to be good for me’ and ‘I haven’t been able to do this before.’ I live with the same condition and I’m fortunate that I’m in a position to change this. I’m extremely proud.”

The app is called Navilens Go and can be downloaded for both IOS and Android phones ahead of the European expansion of the initiative.