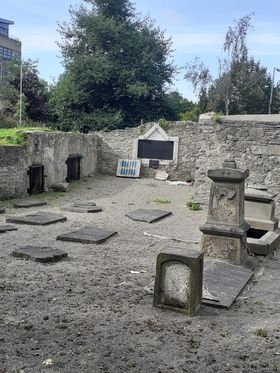 “Despite mine and Clondalkin Tidy Towns calls to raise the security, these calls have fallen on deaf ears,” he said.

“The Graveyard continues to  be used for anti social behaviour and some damage has been done to headstones.

“I am pleading with SDCC to act before its to late, they need to raise the fence around it to protect the site from further vandalism.‘‘ 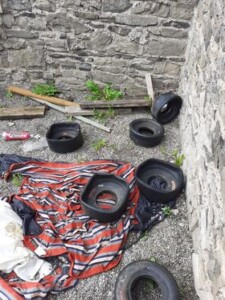 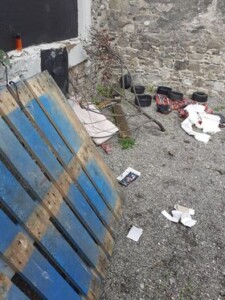 “The monastery of Mount St Joseph at Clondalkin, founded by the brothers of the Third Order of the Discalced Carmelites in 1813, was the first successful monastic foundation in Ireland since the dissolution of religious houses by Henry VIII.

“It included a free or ‘poor’ school and in 1834 expanded into secondary education. One of the free school teachers was Luke Cullen (Brother Elias), who joined the order in 1838. Already forty-five years old, he had previously worked as a seaman.

“During his time as a teacher in Clondalkin he transcribed a remarkable collection of folk memories of the 1798 Rebellion in Wexford and Wicklow.

“Born in Little Bray, in the parish of Cabinteely in 1793, he spent his early years with his grandfather in Glenbrien, near Gorey, County Wexford.

“Clearly the stories he heard in childhood made an impression on him because he spent his later years travelling around the Wexford/Wicklow border area collecting the memoirs of survivors of the Rebellion. He befriended Anne Devlin and mentions in his notes a visit to her in 1847.

“He also corresponded with the biographer of the United Irishman, R.R. Madden, and in one letter described his working conditions:

“I am obliged to write in school hours, subject to great interruption and the clamour of 140 boys taking advantage of me when occupied.

“In spite of these conditions he left behind a comprehensive collection of manuscripts. While most were written on school copybooks, he also used whatever scraps of paper he could find—the margins of roll books, the backs of letters and even around the problems in mathematics exercise books.

“Unfortunately none of his work was ever published. Copies of the original manuscripts, however, are preserved in Trinity College Library (MS 1472), The National Archives, Bishop Street (M 5892a) and The National Library (MS 8339, 9760-2).

“As well as recording the events of 1798 and details on the lives of Anne Devlin and Michael Dwyer, they also include historical notes and observations on the Clondalkin area.

“These papers have been frequently cited by historians and novelists since the 1850s and with the approach of the bicentenary of 1798 the number of authors acknowledging their debt to his work continues to grow.

“Luke Cullen died on 6 January 1859, aged sixty-six years, and was buried in the monastery cemetery.

“The buildings of Mount St Joseph were demolished in April 1988 and the graveyard has since been badly vandalised.

“However, the memorial tablet, listing the monks buried there, including Luke Cullen, is still intact although covered in graffiti.

“There is still time to rescue the cemetery and preserve it as the centre piece of a small memorial park to honour Luke Cullen, the monk of Clondalkin, and the local participants in the 1798 Rebellion.”