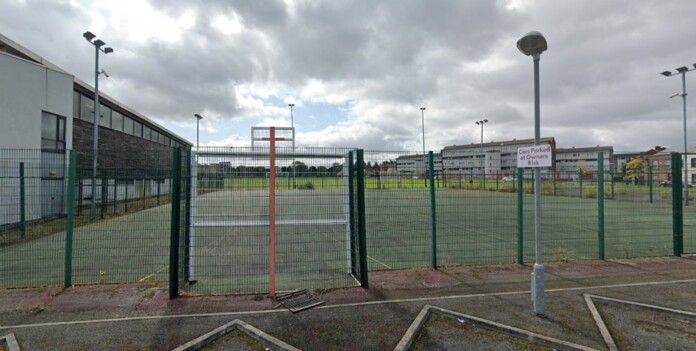 Kilmainham at risk of losing community astro-turf over development

A community Astro-turf pitch is under threat of being removed from Emmet Road in Kilmainham as part of the St Michael’s Estate development being pursued by Dublin City Council.

The Astro-turf, which is ran by Inchicore College, was originally set to be demolished as part of the development with a new pitch being constructed.

However, recent plans show that the pitch has been completely removed from the development with one earmarked to be built at an adjacent location, off-site.

Darragh Moriarty, a Labour councillor for the area tabled a motion at a recent South Are Committee meeting requesting that the council includes an Astro-turf pitch in its revised plans.

“Background to this is there is an existing unloved and uncared for Astro pitch located beside the sports centre, which is ran by Inchicore College,” says Moriarty.

“The pitch has been let fall into poor condition but despite its poor condition it is still used by the local community for football, basketball and outdoor elderly exercise by community groups.

“The pitch is in poor condition, I believe in part, due to the lack of management and oversight.

“It has, in some ways, fallen between two stools between DCC and Inchicore College.

“With proper management, a booking system, changing room facilities nearby in the sports centre, a 5-a-side astro here could be a very well used facility by young people in the area.”

Earlier plans of the development, published in 2018 and 2019, show that the astro-turf was included in the design.

However, the most recent plans show that the pitch has been removed by the council due to not being able to find a suitable location.

“My view is that any redevelopment of this site must enhance existing community amenities and not strip them away.

“There are often complaints regarding the anti-social issues along the canal and the Luas line, taking away a five-aside pitch will do nothing to occupy young people as we try to combat some of those anti-social problems.”

Dublin City Council said that a report on the redevelopment of the Emmet Road site commissioned in 2019 found that “following careful consideration of a number of options it has been concluded that a suitable location for the pitch cannot be provided on the Emmet Road site.

“However, Dublin City Council are committed to providing this facility and therefore a number of alternative locations have been identified and are currently being examined for suitability.”

The local authority dismissed three of the initial ideas as unfeasible and instead said that the pitch would be developed at a nearby site.

It says that Turvey Park, and Our Lady of Lourdes National School and Mercy Secondary in Inchicore are being considered as possible locations for the pitch.

However, Moriarty says that local community groups and residents are concerned about the position of the facility.

“People I spoke to, including the Family Resource Centre, Core Youth Service, St Pats, Inchicore College and the Sports Centre were all overwhelmingly in favour of integrating a new five-aside pitch into the regeneration of the site.

“DCC have come back to say they exhausted all options in that respect and the best option they came up with is to relocate the pitch adjacent to the site – but off the site.

“For me, for the reasons I outlined above in terms of stripping away rather than enhancing an existing community asset, this is unacceptable.

“Further, locating it near a school or away from community infrastructure such as a sports centre would mean that it wouldn’t get the management attention it requires to be a success.”

Moriarty’s motion was unanimously passed by councillors and says that he will be meeting with the design team soon to discuss the development of the Astro pitch.