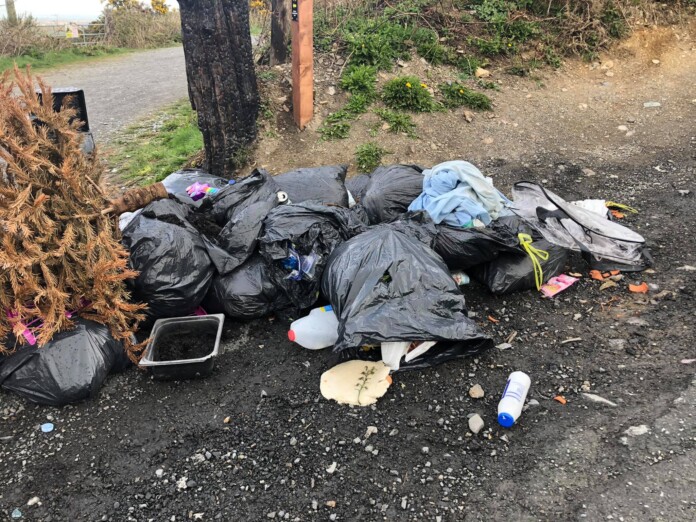 SOUTH Dublin authorities are searching for ways to tackle the problem of illegal dumping as local councillors and politicians say the issue has worsened over the past few months.

The dumping of waste on rural roads and side streets that are hidden from public view has become a regular occurrence according to some councillors as there is little deterring people from dumping their waste.

In recent weeks, household waste has been found in Balally, Carrickgollogan, Grifeen Valley Park, Jobstown, Mounttown and Ballyowen among others.

“There has been a major increase in the volume of illegal dumping throughout the country and we’ve seen lots of examples locally,” says Labour representative for Clondalkin Chris O’Dwyer.

“In South Dublin an extra 700 tonnes of illegally dumped items were removed in 2020.

“Since the start of the pandemic, some local authorities have seen a jump of up to 30% in illegal dumping of household waste and household clear-outs.”

The problem for local authorities and Gardaí, is that there are currently few deterrents for people to illegally dump their waste.

The use of CCTV has been previously challenged in courts as a breach of GDPR and the technique of finding the dumper’s name and address among the waste has been seemingly thwarted – with people beginning to make sure personal details that occur on documents are not included in the dumped items.

“Because of a clause in the GDPR rules, local councils can no longer use CCTV or drone footage to prosecute these crimes,” says O’Dwyer.

“Video evidence is by far the most effective tool for prosecuting illegal dumping, and funding has previously been given to councils to enhance CCTV and drone monitoring of illegal dumping sites.

“There are many community groups who continue to volunteer to protect their local area by cleaning up illegally dumped waste.”

At a recent South Dublin County Council meeting, the local authority said that all “incidents of littering and illegal dumping reported or detected in any area are investigated by the council’s litter warden service.

“Where evidence is found that identifies the alleged polluter, appropriate action is taken.

“As always, the council is grateful for assistance and support from local residents or others in their investigations of such incidents as they arise.

“In the absence of substantive evidence/witness statements and the presence of such witnesses in court it is not possible for us to bring successful prosecutions.”

In a caption on a photo posted online, Gardaí said: “The driver of this car was observed dumping the rubbish pictured in the Sally Gap this weekend.

“Detective Gardaí on an anti-crime patrol watched him and he got to take his rubbish home with him along with penalty notices for littering and [making] an unnecessary journey for him and the occupants.”

Gardaí later confirmed the littering penalty was €150, while the penalty for being outside the 5km limit was an additional €100 per person.

The number of occupants in the car was not revealed.

However, catching people in the act of dumping is a rare occurrence and evidence is rarely found.

O’Toole had asked if the culprit could be prosecuted and in reply, the local authority said that “the litter warden carried out an inspection of the area, no evidence was found, therefore no prosecution can take place at this time.”

Dun Laoghaire-Rathdown councillor Lettie McCarthy said that the dumping had occurred in a “beautiful, picturesque spot.

“Council will investigate this and issue fines if any evidence is found in the bags.

“We can’t organise community cleanups during L5 restrictions but many, many individuals are doing an amazing job picking up litter in their areas.

“We will not let the behaviour of a few dampen our spirits and we will continue to take pride in our areas,” she said.

However, local authorities say they are trying to combat the issue via various means.

South Dublin County Council says that it has installed audio devices at “several bottle banks as a preventative measure.

“The devices play programmable messages when the user comes into range. The use of the devices has been successful in reducing levels of dumping and it is intended to extend their use to other locations in 2021.”

Labour senator Mark Wall recently tabled a bill to the Seanad that would allow local authorities and Gardaí use CCTV and drone footage to combat illegal dumping without the risk of prosecution.

“Illegal dumping is rampant throughout our beautiful countryside, the main streets of our cities, the main roads through our towns, as well as every secondary road and laneway in our country,” he said.

“That’s why I introduced a bill last month that would allow the use of CCTV by our local authorities to facilitate the prevention, investigation, detection and prosecution of an offence of illegal dumping.

“There can be no doubt that CCTV can be and is one of the most effective tools in the fight against the blight of illegal dumping.

Local authorities in Kildare, Meath and South Dublin alone are spending an average of €3 million a year on clean ups.

“If this is replicated throughout our 31 local authorities, then were are wasting on average €90 million per year on clean ups.”

An Bord Pleanála has given approval for the construction of a seven-block apartment complex at Golf Lane, Carrickmines. The proposal, submitted by Bowbeck DAC, consists...
Read more
Southside

James Geoghegan officially became a Fine Gael nominee yesterday after members from each of the 12 branches within the local Dublin Bay South organisation...
Read more
Dublin

By Brion Hoban A man prevented over €18,000 from being laundered after it was transferred into his account following a fraudulent email correspondence, a court...
Read more
- Advertisment -

Psychologists advise: ‘Be proactive about your mental health as Covid restrictions lift’