Home Dublin New South Dublin development of over 1,100 homes gets go ahead
DublinSouthside 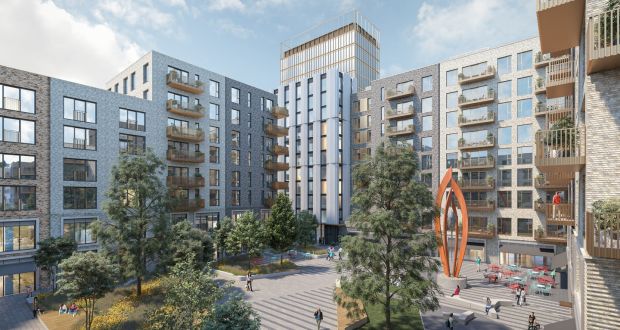 New South Dublin development of over 1,100 homes gets go ahead

Dublin City Council has given the green light for a €625 million development of more than 1,100 homes in South Dublin.

The O’Flynn Group has received permission to proceed with plans to build 1,123 apartments, a 148-bedroom hotel and commercial units at Southwest Gate on the Naas Road.

The group says it will invest €625 million in the development on the red Luas line stretching from central Dublin to its southwestern suburbs.

The residential units proposed as part of the plan will provide a mix of 724 build-to-sell units, 299 build-to-rent units and 114 part V (social and affordable) units across 12 blocks. The apartment buildings would range in height from four to 10 storeys, while the hotel would rise to 15 storeys.

The Southwest Gate scheme also aims to deliver 12,445sq m (133,957sq ft) of community open space to cater for needs of the development’s anticipated population of 2,584.

The site, formally occupied by Nissan, has extensive frontage on to the Naas Road and Walkinstown Avenue.

The development’s name, Southwest Gate, derives from its location at the “gateway” to Dublin city.

It is expected up to 650 jobs will be created to deliver to scheme.

Commenting on the application for the project, O’Flynn Group chief Michael O’Flynn said: “We have a strong track record in delivering quality housing projects over many years.

“We, in conjunction with our design team, have engaged extensively with Dublin City Council and are delighted to submit our application for Southwest Gate and, if successful, we look forward to delivering this project to the people of Dublin as quickly as possible.”