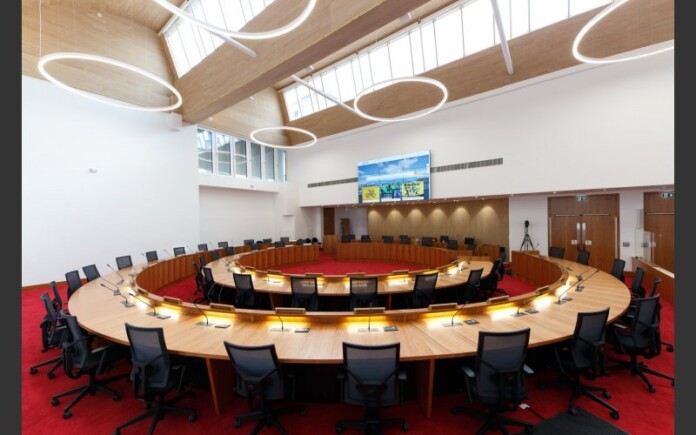 The accepted proposal was reduction from the initial plan of 29 homes.

Carey says that Sinn Fein “conducted an extensive door to door consultation with the local community and tabled an alternative proposal which would have seen an increase in the number of new social homes in the Bawnogue area while preserving an important green space for residents in Lindisfarne and Melrose.”

“The Sinn Féin alternative was tabled by way of amendment at last night’s council meeting.

However, Fine Gael councillor David McManus who opposed the motion said the Sinn Fein submission referred to lands outside of the agreed site, which if passed, who have meant a lengthy delay to construction.

“You cannot add an additional site without starting a new public consultation with drawings and designs – this would delay construction by six months,” he says.

Plans to develop the two-acre site in Clondalkin went to public consultation in August 2020.

After submissions were made, council management agreed to reduce the number of homes from 28 to 19 to accommodate for more recreational green space and a lesser density of housing.

Carey says that the Sinn Fein proposal also would have “sought to use some of the units on the Lindisfarne green site to allow local pensioners downsize, freeing up a number of larger family homes within the Bawnogue area for families on the waiting list.”

Carey says that the alternative proposal would have seen up to 44 new social homes on two sites.

The alternative proposal was rejected by Fine Gael, Fianna Fail and Labour while Green Party, People Before Profit, Socialist Party and one Independent councillor voted for the motion,

The manager’s proposal for 19 homes on the site passed without opposition.

McManus says that if the council followed the alternative motion, “it would mean a new public consultation and new designs and a delay by six months.

“The 19 homes will be 100% public housing on public land but when we see Councillors voting against or to delay housing, it’s a hammer blow for those on the social housing waiting list.”