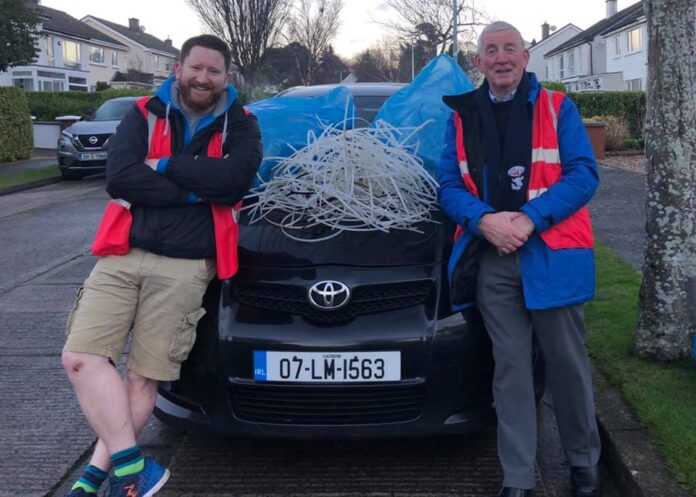 Armed with a homemade telescopic remover made from old mop handles and a bread knife, Dundrum councillor Peter O’Brien says he has removed over 1000 cable ties from lampposts left over from election posters.

Beginning during the first set of restrictions in 2020, O’Brien said he decided to “do it out of frustration.”

“In every election I have been involved in, I and the Dublin Rathdown Labour team, diligently remove and recycle all of our posters and cable ties.

“They are an awful eye sore if left up.

“We had the local and European elections in May 2019 and the General election in February 2020.  On the roads in the Dundrum area and surrounds, I saw cable ties on every lamppost.”

O’Brien said the idea came after talking to his father about exercising while in lockdown.

“My father, Peter O’Brien Snr a member of the Labour Party, is in his seventies.

“During lockdown we wanted to continue being active and maintaining our regular walks and canvassing together.

“Having noticed the number of cable ties, I suggested we set ourselves a target to remove them all from the polls in the Dundrum local electoral area by Christmas.

“We went out as much as the weather, work, council schedule and lockdown levels allowed. We started at the end of August and finished early in the New Year,” he said.”

O’Brien said his tool for removing the higher-up cable ties was a DIY invention.

“For obvious reasons we couldn’t carry a ladder around, so I made a homemade telescopic remover from two old mop handles and a sharpened bread knife.”

The cable ties are recyclable says O’Brien but there limited “facilities that accept them.”

“A lot of on street planters are made from these recycled materials.”

O’Brien estimates that himself and his father have “removed 10 large bags of cable ties.”

O’Brien says that being involved in elections has given him an insight into where the majority of posters are usually erected.

“I have been involved in many elections and erect and remove posters and cable ties myself.

“I am aware of the locations and roads that people used.

“Together myself and my dad devised what routes we would take for our walks and take them one at a time.”

Regarding what he would like to see done in combating the issue of abandoned cable ties, O’Brien says that there are various methods that could be implemented.

“I am not anti-posters but is it clear that something needs to be done to prevent this type of littering,” he says.

“I would favour a poster limit and specific locations in elections and also a coded/coloured use of cable ties so owners can be identified.

“In all elections and referendums, the use of posters are covered under litter bylaws, cable ties should be treated the same.”