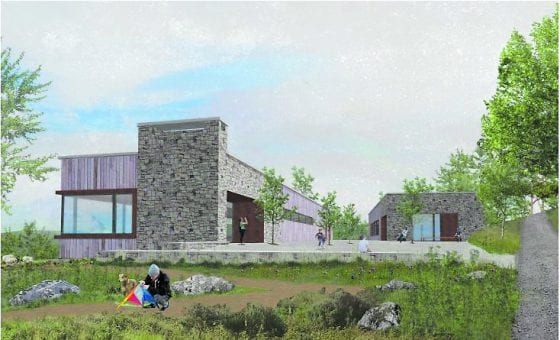 The High Court has today granted a local residents’ group permission for a judicial review into plans for a visitor centre at the Hellfire club.

The action by Hellfire Massy Residents Association (HMRA) is in releation to An Bord Pleanála’s decision to grant South Dublin County Council planning permission to build a visitor centre at the Massy’s Wood estate and Montpelier Hill.

The proposed visitor centre at the iconic site would include a panoramic cafe, exhibition space, a ramblers lounge, toilets, changing facilities, a shop and education centre.

Their application to An Bord Pleanála (APB) has been met with furious opposition from many local residents, conservationists and politicians.

The project is being developed in co-operation with Coillte and the Dublin Mountains Partnership.

HMRA claim that the proposed development would function as a visitors’ hub for the Dublin and Wicklow mountains and profoundly change the way the population of the greater Dublin region interacts with the upland areas to the south of the city.

While the group claims it is not opposed to the development on Montpelier Hill, they do believe the development as proposed will have “profound” environmental consequences on the surroundiung area.

They also claim that when granting planning permission An Bord Pleanála failed to consider the potential impacts on natural habitats and wild animals who live in the area.

Previously plans to proceed with the visitor centre were stopped after APB wrote to the council informing them that their bird survey was inadequate because data on the Merlin, a species of falcon, was limited to the summer months of 2018.

Save the Hellfire Club, an umbrella group of resident and community groups campaigning against the proposed visitor centre, today welcomed the decision from the High Court.

“Great news 4 years of hard work & fundraising paying off,” the group said in a statement.

“We feel justified by this morning’s decision to grant a Judicial Review on 10th Dec!

“Thank you to the over 23k who have supported us so far!”

Metro South West, a group supported by 37 residents’ associations representing some 50,000 people across the south west of Dublin, say they are asking...
Read more
Dublin

A bill which will link addiction services and mental health services in the state is being introduced today. Called the Dual Diagnosis:No Wrong Door Bill,...
Read more
- Advertisment -