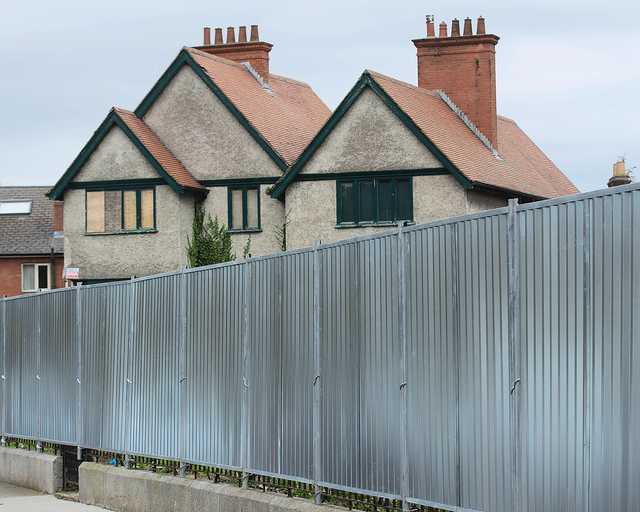 A DECISION by Dublin city councillors to place the former home of a 1916 Rising leader on its list of protected structures has been warmly welcomed.

An Bord Pleanála had approved the demolition of the former home of The O’Rahilly, the only leader killed in action during the 1916 Rising.

The planned demolition of the house, at number 40 Herbert Park, Ballsbridge, had been approved in order to make way for an apartment and hotel development of up to 12 storeys on the site.

Derryroe Ltd had applied to An Bord Pleanala under the Strategic Housing Initiative for an aparthotel extension and 105 apartments facing Herbert Park.

However, last Monday week, city councillors voted unanimously to pass a motion to list the historic property on the Register of Protected Structures.

In its statutory submission to the board, Dublin City Council said it supported the development.

Local Sinn Fein representative Ciaran Meachair, who was one of the organisers of a protest outside the house on Friday, September 11, has welcomed the decision to place the house on its list of protected structures.

Speaking to Southside People he said: “This is a very welcome decision, and the fact that the council vote passed unanimously shows how much this has started to register with people as a part of our history and heritage that should be protected.

“Chris Andrews TD, Cllr Daniel Ceitinn and myself have been delighted with the amount of support the campaign has received from people across Ireland.

“The building has major historical significance, aside from being the home of a leader of the Easter Rising it was also where planning for the Howth gun-running took place, and where Na Fianna Eireann and the Irish Volunteers met.

“O’Rahilly’s last letter, written to his wife as he bled to death on Moore Street, was addressed to the house.

“His wife Nancy who lived here until her death in 1961 was a remarkable person in her own right, being very active in Conradh na Gaeilge and Cumann na mBan.

“In addition to this, the house has some architectural value as it was built in 1907 to promote Irish industry, and is considered a great example of Edwardian architecture.

“It is falsely claimed that Dublin has enough memorials to the Easter Rising, in fact out of the 31 locations in Dublin directly related to the Rising, 19 have been demolished.

“We have also witnessed the demolition of the homes of Robert Emmet and Wolfe Tone.

“We cannot continue to endlessly knock down sites related to our history and revolutionary heritage.”

Mr Meachair added: “It is also wrongly said that the demolition is an attempt to address the housing issue in Dublin.

“A part of this development would have included ‘aparthotels’, and I would argue Dublin has already become swamped with hotels.”

“The price of the apartments for sale has been set at over &euro;625,000 for a two bedroom apartment, a price most ordinary people just can’t afford.

“The housing crisis will be solved with social and affordable housing, not luxury developments for the rich”.

“Furthermore the area where the house now stands is only to be used as an entrance to the rest of the complex, rather than the site of the apartments themselves.

“It wouldn’t be too hard to accommodate both the historical building and apartments. The building could be repurposed as a cultural centre or community centre or as a museum.”

“Step forward in campaign to save the Rahilly house,” he said following the announcement of the result of Monday night’s vote.

“I could not attend tonight’s Dublin City Council meeting due to illness (nothing too serious) but was delighted to see the Council adopt my motion calling for the historic O’ Rahilly home, 40 Herbert Park, to be added to the list of protected structures.

“That process has now begun so the developer cannot touch the house.

“Well done to all who lobbied, campaigned and protested.

“A breather now until the next phase.”

The latest weapon in Dublin's ongoing battle with litter will make it easier for Dubliners to recycle. This is after new bins have been installed...
Read more
- Advertisment -