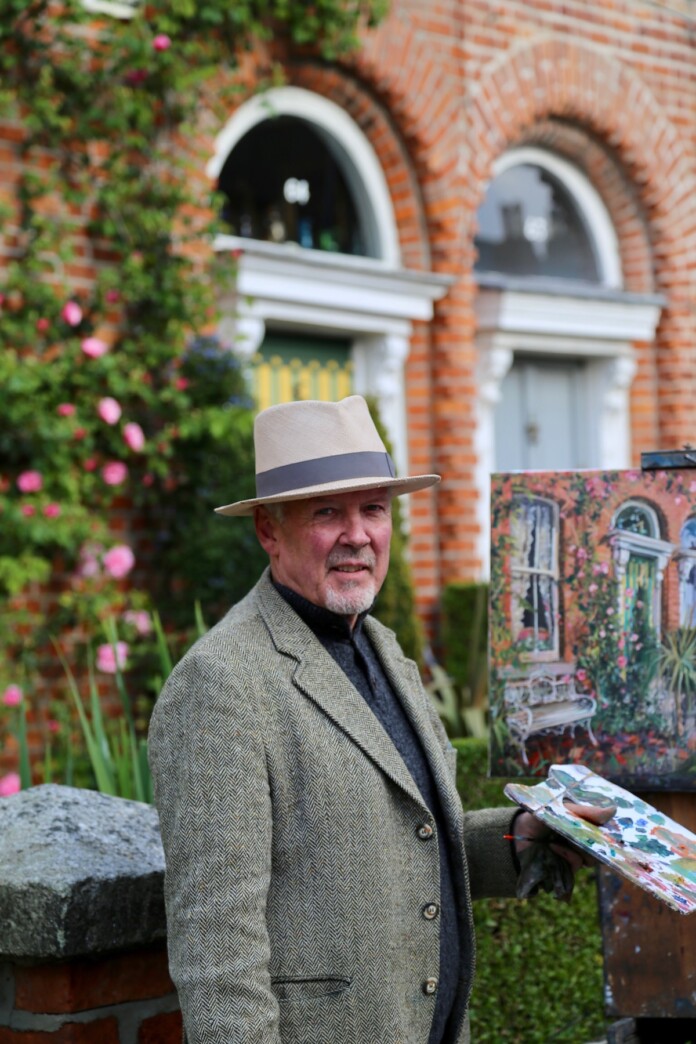 FINGLAS native Gerard Byrne is a leading figure of contemporary Irish painting who used the lockdown as an opportunity to get creative.

Later this month Byrne will share the fruits of his work, created during the past six months, at his second major show of 2020.

‘Pause for Harmony – Art in Lockdown’, is the name of his exhibition set to run at his studio in Ranelagh.

As the name suggests, the exhibition presents art created by Byrne during the months of lockdown, including over 50 oil paintings and several charcoal sketches.

While lockdown has meant many things to many different people, for Byrne it also became a period of reflection, a pause from the bustle and pressures of ‘normal life’, something which is reflected in the tranquility of his latest work.

For Byrne, an artist who regularly travels abroad to paint his ‘en plein air’ (outdoor) scenes, lockdown was also a rediscovery of his native city.

Unable to travel in search of beauty, Byrne says he was forced to find the beauty directly around him.

In doing so, he says he encountered the beauty of Dublin, a city in lockdown “quiet and calm, gilded in Irish early summer sunshine”.

“When I paint outdoors I capture not only what I see but also the energy of my surroundings,” Byrne says.

“I thought this was a very special time and I wanted to capture that collective energy in as many works as I could.”

So he took to his rooftop, earning himself the nickname ‘the artist on the roof’, and from there he went into the streets to paint the Georgian architecture for which the city is known.

“What is important to me is a sense of interaction with the scene I paints,” he explains

“I outdoors, rather than from photographs, in order to absorb the energy and history of a place and its people.

“In this case, I wanted to capture the feeling of community and peace found despite the hardships the city has faced.”

The result is a series of paintings and sketches that bring the viewer through South Dublin and down the coastline to Seapoint and Dalkey.

Byrne’s oil painting is full of bright colour, juxtaposing architecture with the vibrant foliage for which his work has become known.

Most notable is the skill with which he depicts the interplay of light and shade, and because of this he can be referred to as a modern impressionist.

The Gerard Byrne Studio in Ranelagh and run until Sunday October 25.

Night, along with a preview of the exhibition, including thirty minute tours and a live Q&A with the artist.

Further information is available at https://culturenight.ie/event/the-gerard-byrne-studio/

Investigation underway after discovery of woman’s body in Malahide

An investigation is underway following the discovery of a woman’s body at an apartment in Malahide this morning. The body of a woman in her...
Read more
Northside East

Irish Water is progressing with construction of almost 1.5km of new watermain along the Brackenstown road to safeguard water supply to homes and businesses...
Read more
Northside East

Investigation underway after discovery of woman’s body in Malahide

An investigation is underway following the discovery of a woman’s body at an apartment in Malahide this morning. The body of a woman in her...
Read more

Irish Water is progressing with construction of almost 1.5km of new watermain along the Brackenstown road to safeguard water supply to homes and businesses...
Read more