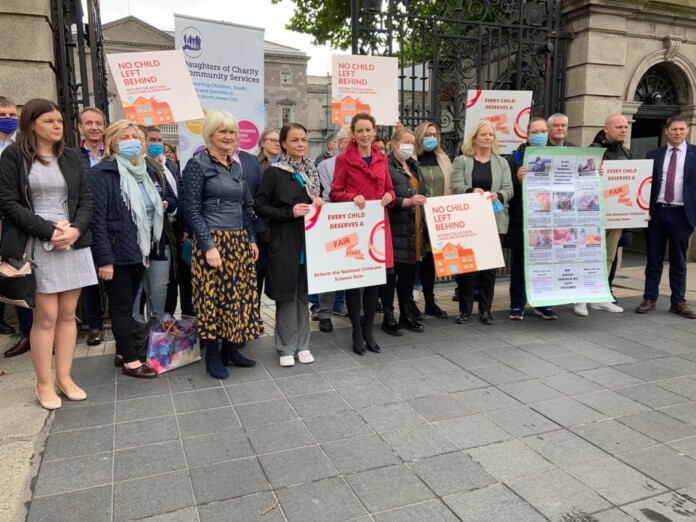 Senator Marie Sherlock joined with childcare workers in organising a protest outside Leinster House on Tuesday in opposition to the exclusion of some of the most disadvantaged children from the new National Childcare Scheme.

Senator Sherlock, who is based in Dublin Central, has been working with childcare providers who first flagged problems with the National Childcare Scheme in early 2021. 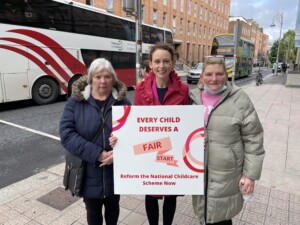 The protest was attended by approximately 50 providers and workers, including representatives of the Association of Childhood Professionals (ACP), the Federation of Early Childhood Providers (FECP) and SIPTU’s Big Start campaign.

The protest was also joined by frontline childcare providers based in Dublin’s North Inner City, including the Daughters of Charity on Henrietta street, Lourdes Youth and Community Services (LYCS) and the Community Afterschools Project (CASPr).

“Children’s needs must be put at the heart of any childcare scheme, irrespective of their parent’s circumstances,” Senator Sherlock said at the protest.

“However, under the new National Childcare Scheme, there are children who need the stability and support of childcare or afterschool care who now find themselves excluded, when under previous State childcare support schemes they would  qualified.

“This requires immediate action and we need to ensure that every child gets a fair start. Many of the families affected by this live in extremely challenging situations – addiction, mental health problems, physical ill-health or cramped accommodation. For these families, creche or afterschool plays a vital party in providing stability and reassurance in the lives of highly vulnerable children.

“Our childcare system is already pushed to the brink of its capacity, and we have been inundated with correspondences from providers affected.

“One early?years?manager told me that they have a situation where a? six year?boy whose mother, a lone parent, has had numerous mental health difficulties and very poor?literacy.

“She depends on the afterschool service to help her son with his homework and to provide emotional support for his difficult behaviour.

“A child in these circumstances would have qualified for aftercare support under the old system, but from this September will qualify for nothing under the new National Childcare Scheme.”

Senator Sherlock then described the situation of a? six year old?girl whose mother is trying hard to make a fresh start in life after years of addiction.

As her daughter?doesn’t?qualify for support under the new National Childcare Scheme, the service offered her a reduced fee at a loss to them, but she?couldn’t sustain it after a period of months. That child now has no supports around her.

“As well as the impact on already disadvantaged children, there is also a major financial implication for providers, some of whom are forced to consider closing some of their services,” Senator Sherlock continued.

“We already have a major shortage of places in the North inner city and elsewhere in the country. We simply cannot afford any further closures.

“No child should be left behind. I am calling on government to hear the families crying out for better support and a fairer start for their child.”