FRANK Russell remembers his first ever search and rescue operation.

It was in the early 1970s and he and his helicopter crew were called to rescue two sailors that got into trouble off the coast of Galway.

“To be honest, on our way over, we thought they had very little chance,” he said.

“Two sailors had gone overboard near Cleggan and it took us about two hours to get there.

“When we arrived, there were little fishing boats down below pointing to the cliffs at Inishark,” he said.

Russell says that he and his crew spotted the two men, stranded without their boat, struggling in the choppy water.

“I winched one man up and when he got on, he was very emotional and grateful.
“To thank me he slapped me on the shoulder which pushed my arm that I was holding the power control with,” he says.

“This caused the helicopter to nearly fall, almost landing on the other sailor below – thankfully, I saved it just in time.

“My first search and operation could have been my last,” he says with a laugh.
Russell, who was born in Blanchardstown, joined the Air Corps in 1966 after entering as an army cadet in 1964.

“I always wanted to be a pilot as a kid,” he says.

“We had these great comics with heroes in them, and a lot were pilots.”

After training in the Air Corps, Russell volunteered to be a Search and Rescue helicopter pilot when at the time there were only three rescue helicopters in Ireland.

“It took 100 hours of flying and then you had to pass a test to be a search and rescue pilot,” he says.

“We always had two other crew members on board, and thankfully, during my first mission they were experienced paramedics, so they helped me a good bit.”

In 2009, Russell decided to retire from the Defence Forces after decades of service and dozens of stories to tell.

“Last Autumn I wrote some pieces about what Blanchardstown was like back in the 1950s for my brother who was ill at the time.

“He said to me that I should put all my stories together and give them out to friends and family,” he says.

“It gave me something to do during lockdown.”

After he received positive feedback for his writing, Russell found a publisher down in Clare who agreed to print a book containing various stories from his adventurous life.

“Nearly everything in the book comes from memory,” he says.

“I may be getting old, but I’m still sharp.” 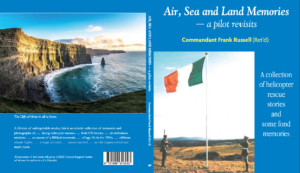 His book, called ‘Air, Sea and Land Memories’, contains several anecdotes from his childhood in Blanchardstown to his daring rescue missions in Ireland and abroad.

“In 1978, I was asked to be part of a UN mission in Damascus, Syria and help monitor a ceasefire between the Syrians and the Israelis,” he says.

“I was there for 18 months and was one of only five Irish guys.

“There were men from all over Europe, but only five of us from Ireland,” he says.

“Thankfully, there was a war before I got there, and a war after I got there, but the ceasefire was maintained during my time.”

Russell also talks about his ascent of the biblical Mount Sinai in Egypt and witnessing a devastating air crash in Connemara, among others.

He also talks about his cancer journey, something that inspired the book, too.
“I am a two-time survivor,” he says.

In 2002, Russell co-founded the LARCC Cancer Support Centre in Mullingar, which offers psychological help and support to cancer sufferers.

“All the proceeds made from the book will be going towards the centre,” he says.

“It’s been 22 years after my first diagnosis of neck cancer and I feel great now.”

And those two sailors that he rescued?

“Turns out they were French fishermen,” he says.

“But to learn why they were stuck off Inishark, you’re just going to have to buy the book.”

Air, Sea and Land Memories by Commandant Frank Russell (Ret’d) is available from Supervalu Blanchardstown for €20 with all proceeds going towards the LARCC Centre