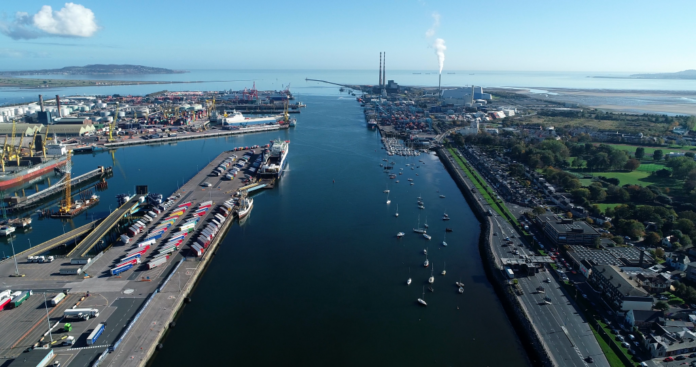 Dublin Port has today reported trading figures for the nine months to the end of September 2021.

Overall port throughput declined over the period from January to September 2021 by -3.3% to 25.9 million gross tonnes compared to the same period in 2020.

Notwithstanding the decline of -3.3% in overall gross tonnes, the number of containers and trailers in the Ro-Ro and Lo Lo modes – the largest part of Dublin Port’s business – declined by just -0.5% to 1,060,445 units but with very different trends between the two modes:

Behind the different trends in Ro-Ro and Lo-Lo, there has also been a large and consistent change in the geographical mix of Dublin Port’s trade since the introduction of Brexit border controls in January 2021.

Whereas overall unitised volumes were down by just -0.5%, volumes on routes to Great Britain declined by -21.2% to 537,680 in the nine months (primarily Holyhead, Liverpool and Heysham).

On the other hand, volumes on routes to Continental Europe increased by +36.3% to 522,765 units (mainly Rotterdam, Zeebrugge, Antwerp and Cherbourg).

As a result, unitised volumes on routes to Great Britain now account for just over one half (51%) of all unitised trade where, before Brexit, they accounted for approaching two-thirds (64%).

Allied to this, the proportion of Ro-Ro units which are driver accompanied (181,605 after nine months) has fallen from 32% to 26%.

As a sign of increased economic activity, new vehicle imports in the nine months from January to September increased by +19.0% to 63,000.

By comparison with the volume decline in the unitised modes of Ro-Ro and Lo-Lo, volumes in the non-unitised modes were ahead after nine months by +3.7% to 4.4 million tonnes:

Notwithstanding growth in passenger and tourist volumes on ferries over the third quarter from July to September, passenger numbers (including HGV drivers) after nine months are behind last year by -12.7% to 568,000 and tourist vehicles are down -1.8% to 167,000.

“After nine months, the impact of Brexit on the profile of Dublin Port’s trade has become clear with volumes on unitised services to Great Britain declining by just over one-fifth while volumes on services to Continental Europe increased by more than a third. Because of this, our unitised volumes are now split 50/50 between GB ports and ports in Continental Europe. Before Brexit, GB ports accounted for almost two-thirds.

“The movement of Irish trade to EU markets and away from the UK has also had the effect of reducing the number of trailers that move through Dublin Port which are driver-accompanied. Over the nine months, nearly 60,000 loads which would have been driver-accompanied before Brexit were shipped as unaccompanied trailers. This is bad news from a port capacity perspective.

“In addition, we have seen a much larger decline in gross tonnes in the unitised modes than we saw in the number of containers and trailers; 3.3% compared to 0.5%. Our interpretation of this is that the average size of a load in a container or trailer has reduced because operational efficiencies which the Single European Market had facilitated in trade with Britain have been removed because of Brexit.

“The only positive thing we have seen since Brexit is that the much-feared congestion and delays as a result of border controls have not materialised.  The average number of physical inspections on trailers coming off ferries from Britain is less than three per sailing. However efficient the border inspections by State agencies are, some Ro-Ro operators are now opting to use Northern Irish ports instead of Dublin. We believe that this dislocation of trade to ports in Northern Ireland will be a permanent feature. The dislocation is a reversal of what happened in Dublin Port when the Single European Market came into being thirty years ago.

“The long-established year-on-year growth trend we have seen in Dublin Port has been disrupted by Brexit and by Covid-19. However, we believe that this is a temporary phenomenon and that the growth we are seeing in volumes on services to Continental European ports, will, by 2023, drive throughput volumes back to the record levels of 2019.

“In the meantime, the different patterns in UK trade compared to EU trade are creating capacity pinch points in some parts of the port and we currently have two shipping lines looking to commence services in Dublin which cannot be accommodated. To remove these capacity pinch points, we need to continue our capital investment programme to increase port capacity in the short-term.  This includes relocating the last four empty container depots from Dublin Port to Dublin Inland Port in order to free up six hectares of land for cargo handling.

“Looking to the longer-term, we are progressing with the 3FM Project – the third and final Masterplan project required to bring Dublin Port to its ultimate capacity by 2040 – and will shortly commence public consultation before we start into detailed design and environmental impact analysis. We will lodge a planning application with An Bord Pleanála for the 3FM Project in 2023.”