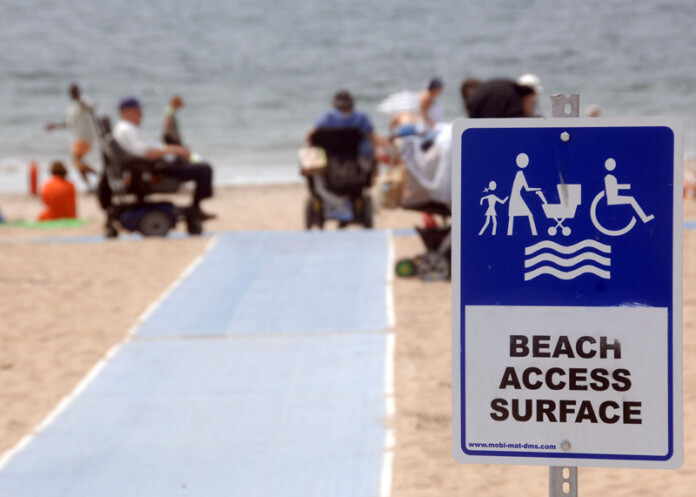 Mats that give wheelchair users greater access to beaches, won’t be seen on Fingal shores any time soon, according to Fingal County Council.

The news comes after the local authority responded to a question tabled by a councillor at a recent Howth-Malahide Area Committee meeting.

Earlier this year Dublin City Council began a pilot project where the mats would be installed at Dollymount Strand.

The mats run from the perimeter of the beach to the water’s edge and give wheelchair and scooter users greater mobility on the sand.

The trial at Dollymount was initiated after a recommendation from the North Bull Island Oversight Forum and more mats will be installed along the coast in future years, subject to use and demand.

However, Fingal County Council does not have similar plans, it says.

Social Democrats councillor Joan Hopkins asked the chief executive: “When can we expect to see beach mats for wheelchair access to beaches in Howth and Malahide?”

In response, the council said that “there are currently no plans to install beach mats for wheelchair access to beaches.

“It is unclear how these would need to be maintained, for example clearing sand from them, re-positioning them following movement by the wind or tide, or by animals.”

FCC said it was aware of the pilot project being carried out at Dollymount Strand and “intend to learn from their experiences of this trial.”

Hopkins told the Northside People said she was “disappointed” in the council’s response.

“Other places have already proven they work,” she said.

“I won’t give up, I hope we will have them by next summer at the latest.”

Hopkins says that accessibility is a matter that needs to be a made more of a priority when designing and installing public infrastructure.

“I have also been highlighting issues with footpaths that are continuously blocked with vehicles and wheely bins – I have witnessed people in wheelchairs having to leave the path and go on the road – this is totally unacceptable,” she says.

“This last summer I was in Lahinch.

The facilities for people in wheelchairs were far superior to ours and it got me thinking so I raised a question regarding the blue flag status in Portmarnock.

“How can we have a blue flag when our toilets are not wheelchair accessible and neither is the beach?

“You can get on to the sand in a wheelchair on Fingal beaches, but you cannot get to the water.

“The sea gives me such pleasure and I find it brilliant for my mental health, I think everyone should be able to do this.

Wheelchair users can avail of beach-accessible wheelchairs through Fingal County Council but are only available at South Strand Skerries, Velvet Strand Portmarnock, and Balcarrick Beach Donabate in July and August and must be booked in advance.