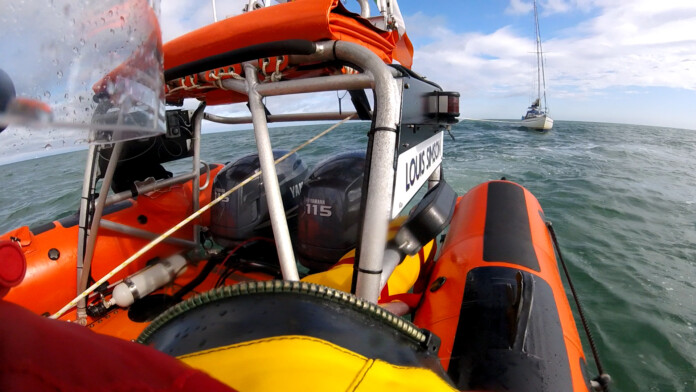 Skerries RNLI towed a 34 foot yacht with two men on board to safety on Friday afternoon after they suffered mechanical failure with their engine.

Shortly after 12pm, Dublin Coast Guard received a VHF call from a 34 foot yacht reporting that they had suffered a mechanical failure and had lost both drive and steering.

They were situated approximately 2 miles north east of Lambay island and were in need of assistance.

Dublin Coast Guard then updated the lifeboat with GPS coordinates that had been provided by the stricken vessel. These coordinates were entered into the navigation system on the lifeboat, enabling the crew to plot a course directly to the yacht.

Once the lifeboat arrived on scene, the Helm carried out a risk assessment and decided that the safest course of action would be to tow the vessel to the nearest suitable berth in Malahide marina.

The crew communicated their intentions to the men over VHF radio. A towing bridle was rigged on board the yacht before a line was passed from the lifeboat, establishing an astern tow.

An hour later, as the lifeboat approached the entrance to Malahide estuary, the tow was reconfigured, bringing the yacht alongside the lifeboat.

This enabled the lifeboat to have greater directional control over the casualty vessel as it maneuvered its way up the narrow channel towards the marina before gently bringing it alongside at the pontoon.

Once the casualty vessel was safely alongside, the lifeboat navigated out of the estuary and headed for Skerries, arriving back at station almost 3 hours after they had launched. The lifeboat was washed down, refuelled and made ready for the next call out.

Conditions on scene at the time were one metre swells with force five to six southerly wind, occasionally gusting to force seven.

Speaking about the call out on Friday, volunteer Lifeboat Press Officer for Skerries RNLI, Gerry Canning said: “Todays call out goes to show the importance of carrying a means to contact the shore.

“The sailors today were very experienced and had all the best equipment, but things can still go wrong out on the water.

“They were able to provide us with their exact location using GPS which is always a great help.

“The crew in the boat then did a great job using all their experience and training to make a difficult tow look easy.”