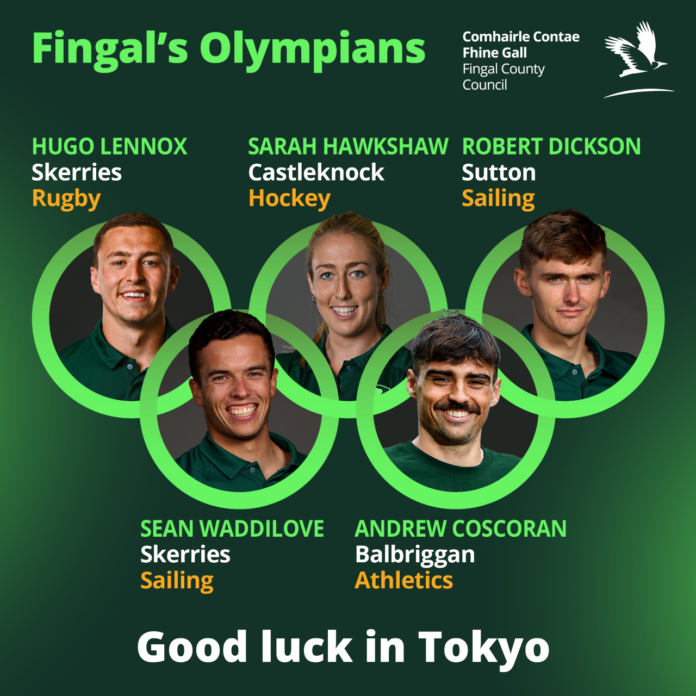 Five athletes from Fingal set to represent Ireland at the Olympics

FIVE athletes from Fingal will be participating in this year’s Olympic games which begin in Tokyo today.

The Olympians will be competing in sailing, athletics, rugby sevens, and hockey.
After their performance at the 49er Olympic Qualifier in Lanzarote, Sean Waddilove, of Skerries Sailing Club, and teammate Robert Dickson, of Howth Yacht Club, will be representing Ireland in sailing at the Toyko Olympics.

Andrew Coscoran from Balbriggan will also be competing in the games.

The 25-year-old, who competes with Star of the Sea Athletic Club, qualified after running the fastest 1,500 metres by an Irish athlete in eight years.

Hugo Lennox, a member of Skerries Rugby Club, will be part of the Rugby Sevens team in Tokyo.

This is the first time that Ireland will field a rugby team in the Olympics, with the Rugby Sevens event only making its debut in 2016 at Rio de Janeiro.

Sarah Hawkshaw of Castleknock completes the quintet of Fingal members who are heading to the Olympics as part of Team Ireland.

The Railway Union Hockey Club player has been named on the 16-player Irish Hockey national team which will compete at the upcoming games and look to emulate their performance at the 2018 World Cup when they won the silver medal.

Speaking about the athletes, the Mayor of Fingal, Councillor Seána Ó Rodaigh, said: “On behalf of everybody in Fingal, I want to wish this talented group the very best in the upcoming Olympic Games.

“Their years of dedication and hard work are now being rewarded and they should be so proud of their achievements.

“Having taught Sean and Hugo in St Patrick’s Senior National School, it has been incredible to watch them on their journey from sporty children to elite athletes participating in the Olympics.

“I am looking forward to supporting them and their fellow athletes from home with the rest of Fingal.

The Chief Executive of Fingal County Council, AnnMarie Farrelly also wished the best of luck to the athletes.

“The very best of luck to those representing Team Ireland in the Olympic Games 2021.

“We are so proud of the Fingal participants who have worked and trained vigorously over the years to get to where they are today.

“They are an inspiration to many.

“We will all be thinking of them over the next few weeks as they make the final preparations for Tokyo.

“Sport plays an important part in the work of Fingal County Council to build communities and our Sports Office has done tremendous work over the past 20 years to promote participation.

“Our five Olympians are excellent role models and have shown that it is possible to journey on a path from Fingal to the Olympics.”

The 2021 Tokyo Olympic Games will take place from July 23 to August 8.