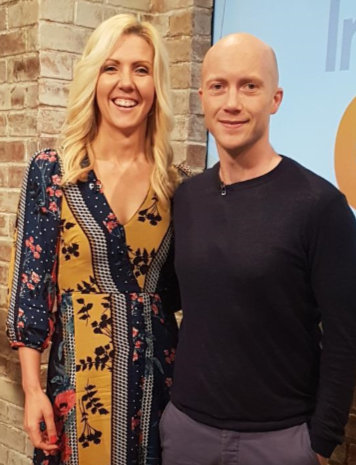 A Northside couple are set to feature on Dragons’ Den on BBC One with their award-winning invention.

Husband-and-wife team James and Aileen McAuley from Malahide will appear on the hit BBC programme on Thursday June 3 with their brainchild ‘The Wriggler.’

Described by the couple as the very first portable baby-changing mat specially designed for babies and toddlers who wriggle during a nappy change, ‘The Wriggler’ is all set for its TV debut.

Changing a nappy can be really stressful and a battle for parents and their little one, particularly as they begin to roll and crawl.

And given you change a baby’s nappy at least six times a day until potty training, which amounts to an incredible 6,500 times, the couples’ invention could be a gamechanger. 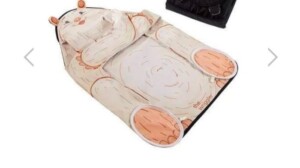 Inspired by personal experience with their own little boy, the couple came up with ‘The Wriggler’ (pictured above) the anti-roll changing travelling mat with straps that resembles an adorable bear character.

The couple say ‘The Wriggler’ is made from premium quality, baby safe materials and is fully wipeable so messes can be wiped clean in seconds.

They also say their invention has already proved its popularity by notching up awards and plaudits from some of the largest independent parenting review websites in the UK. At present the Wriggler is available via their website www.thewriggler.com.

However, schoolteacher James and educational psychologist Aileen would very much like to develop further products and hope with investment and guidance from the Dragons, they can roll The Wriggler out globally.

“In our wildest dreams we never imagined that an idea dreamt up at our kitchen table could have resulted in us appearing on BBC TV on Dragons’ Den,” said the couple.

“It all started when our eldest was just a few months old and I really struggled to change his nappy, it took both hands just keep him still,” James tells Northside People.

“So the idea was born.

“I borrowed a sewing machine and taught myself how to sew and between us with research on materials, I made the first sample.

“And bingo it worked, since then nappy changing time has been transformed and the business is going from strength to strength.”

We will see Aileen and James McAuley appearing before UK Dragons Sara Davies, Touker Suleyman, Deborah Meaden, Peter Jones and Tej Lalvani on June 3 at 8pm on BBC One.

Will the husband-and-wife team have what it takes to hook the Dragons or will the Dragons wriggle out of investing? You’ll have to tune in to find out.