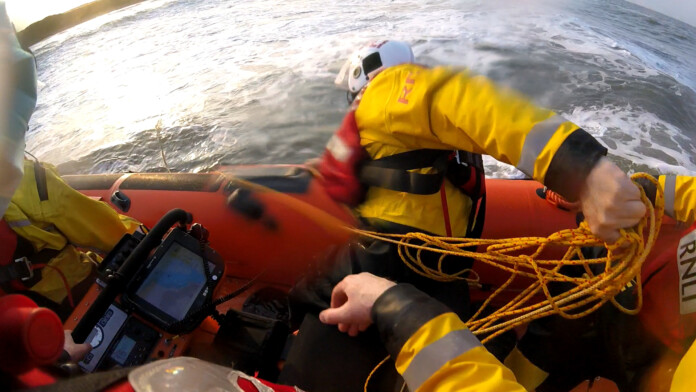 The volunteer crew were paged shortly before 7pm on Wednesday and launched the Atlantic 85 inshore lifeboat “Louis Simson” within minutes and proceeded directly to the area indicated by the caller.

Arriving on scene, the crew discovered that the Coast Guard helicopter Rescue 116 was already on scene.

They were winching a man from the water and on to the beach where an ambulance crew and members of Dublin Fire Brigade were waiting to administer first aid. From there he was transferred to hospital for further care.

There were reports that other swimmers had entered the water to assist the casualty and a subsequent 999 call raised concerns that there may still be someone in the water.

Rescue 116, Skerries RNLI and Skerries Coast Guard unit coordinated to carry out a search of the immediate area covering the water and the shoreline. The lifeboat investigated a number of objects at the request of R116, including a lifebuoy which they recovered into the lifeboat.

When Dublin Coast Guard was satisfied that the area had been thoroughly searched and there were no further swimmers in danger the lifeboat was stood down and returned to station.

At the time there was a force three to four easterly wind blowing and a slightly choppy sea.

Speaking about the call out, volunteer Lifeboat Press Officer for Skerries RNLI, Gerry Canning said: ‘When a person is in trouble in the water every second counts. Rescue 116 were on scene very quickly and it was an excellent response from all of the emergency services who worked brilliantly together.