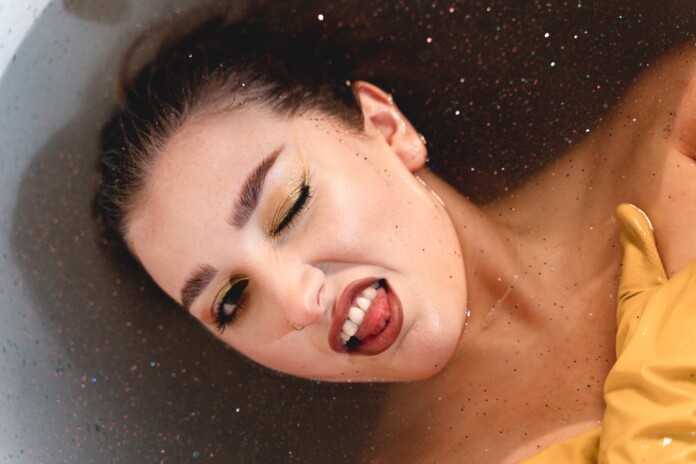 Pastiche: The ‘unashamed pop lover’ pop artist on the rise

According to her Instagram bio, Pastiche is an “unashamed pop lover,” and after hearing her speak, you don’t doubt it.

From Malahide, Pastiche (Jade Roche) says she grew up listening to “Lady Gaga, Katy Perry and the second coming of Madonna.

“These female artists were exploding when I was in my pre-teens,” she says. “Pop music was all around me.”

Although she has only released two singles so far, Pastiche’s sound is refined and well crafted – seemingly written with a purpose and flair not often seen in such an inexperienced artist.

This could partially be because Pastiche isn’t actually all that new or inexperienced to the music industry.

“I’ve only been releasing music for the past year, but I’ve been working in the industry for about five years now,” she says.

“I performed backing vocals for other people’s bands and projects and also work as a voice over artist, too.”

Pastiche also grew up in a musical family, with her father being a member of the Artane Boys Band while her grandad was a church singer.

“I went to the Billie Barry Stage school when I was four years old,” she says.

“That really influenced me,” she says. “I learned about theatre and theatrical dress, and how to perform.”

Pastiche says it was her keyboard teacher though who first told her she had a gift for singing.

“I was taking keyboard lessons in Swords and one of the days I just started singing.

“My teacher turned around and said, “you’re very good, what are you doing taking keyboard lessons?”

“After that I decided to sing,” she says.

Pastiche decided to enrol in BIMM after secondary school and it was there when she “began studying all sorts of music.

“I began leaning towards rock music, the grit that comes with it,” she says.

“Now in my music I borrow things and styles from rock.”

Pastiche’s vocals certainly stand out in her work – from the intense growls found on her debut single ‘Chasing Down the Fame’ to the softer inflections featured on the electro-pop anthem ‘Heaven’, her range is impressively broad.

‘Chasing Down the Flame’, the moodier of the two tracks, stars a sticky, passionate hook and an ethereal atmosphere reminiscent of LP1-era FKA Twigs.

‘Heaven’, meanwhile, wouldn’t be out of place being blared over a sweaty dance floor, an assured but rousing, straightforward pop song.

One major lyrical and visual theme that runs through Pastiche’s work is feminism and female empowerment, something she is intent on highlighting outside of her music too.

“There are so many great female Irish artists coming through.

“People like Denise Chaila, SAOIRSE and Soule – she had one of the biggest songs of 2019.

“But female artists are being pushed aside.

“You hear the same thing all the time, “women will be played on the radio if their stuff is good” but it’s just not true.”

A gender disparity report which was published by PR consultant Linda Coogan Byrne in 2020 showed out of the top 20 Irish artists across 28 music-playing radio stations – which encompassed 560 artists – just 41 were female.

This means that female artists represent just seven percent of the all the top 20 artists.

“We have some fantastic female artists in this country, but they’re just not given the chance.”

Regarding her writing process, Pastiche says the gets her “best ideas while going for a walk or in the shower.

“Everybody sings in the shower,” she says.

She will usually begin with a melody or vague idea of lyrics and build from there.

“I kind of freestyle on my piano.

“I then send whatever I have to my producer and see what’s there.

“It’s all kind of manic, but like a jigsaw – piece by piece – it comes together.”

Similar to the industry as a whole, Pastiche’s projects – present and future – have been altered due to the pandemic, but she says that she still has plans for 2021.

“It was kind of a secret, but I was meant to play Whelan’s in May but that’s now going to have to be rescheduled.

“I also hope to release an EP sometime this year, but I might bring out a single or two beforehand,” she says.

Pastiche has also taken to performing online concerts to substitute for the lack of in-person concerts.

“I had one a few weeks ago and because it was so long since I had performed, I felt myself getting really nervous.

“But that’s the benefit of a stage name, it almost acts as a second personality.

“As soon as I put on my makeup, I was no longer Jade, I was Pastiche, and Pastiche doesn’t get nervous.”

The music video for ‘Heaven’ is set to be released on Friday, February 18.