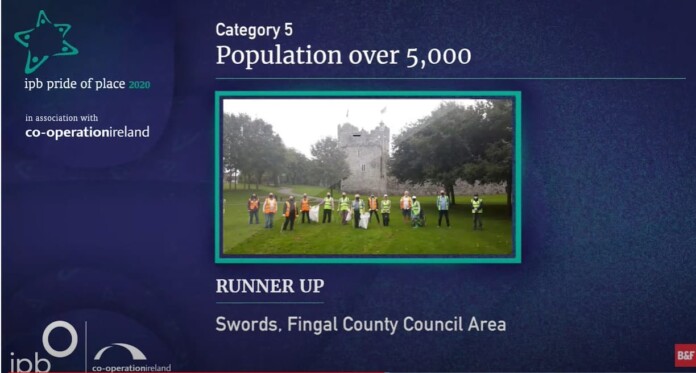 Swords Tidy Towns were runners up in last night’s Pride of Place Awards.

The Tidy Towns Committee said this was a fantastic result for Swords.

It is national recognition of all the hard work put in by our wonderful volunteers and the management and staff of Fingal County Council,” they said.

“Well done everyone. We shall receive a trophy and a 500 euro cheque from which Swords will benifit.

As well as Swords Tidy Towns, Skerries Age-Friendly Initiative, and Ballyboughal Hedgerow Society represented Fingal at the annual awards ceremony that was hosted by Marty Morrissey.

Pride of Place is an All-Ireland Competition which showcases the best in community development and achievement on the island. The competition is organised by Co-operation Ireland and is open to every local authority north and south to nominate groups to represent their county. This year, due to the pandemic, the competition pivoted online, and judging was carried out by way of video calls to the participating groups.

The Mayor of Fingal, Cllr David Healy said, ahead of the finals event: “Pride of Place is a very important event each year for Fingal and allows communities to highlight the great work they do in partnership with the local authority. This is especially so in a challenging year like 2020 with the Covid 19 pandemic playing havoc with so much of community life as we know it.”

In 2019 Fingal County Council had two winners in the Competition finals, held in Kilkenny, when Flemington, Balbriggan won the overall prize for urban neighborhood and Whitestown Estate Management, in Blakestown, D15 was the runner up in the housing estates category.

This year, Swords Tidy Towns represented Fingal in the population over 5,000 categories. This hard-working local group is the life and soul of Swords and has worked very hard to keep things going throughout the worst of the lockdown months.

There was great success for Swords Tidy Towns representing Fingal at the IPB Pride of Place Awards which were announced recently. The Virtual Award...
Read more
Northside East

Gardaí say they have seized over €100,000 worth of stolen property and property connected with the proceeds of crime following a search operation at...
Read more
Northside East

Former Dragons’ Den investor and businessman Barry O’Sullivan has teamed up with Dublin charity Focus Ireland on a project to deliver over 100 homes...
Read more

Gardaí have seized €140,000 worth of cannabis in Clondalkin and arrested two men in relation to the seizure. Shortly after 5pm yesterday evening, Saturday, November...
Read more

More than one million tune in to see the Toy Show

More than one million people are believed to have tuned in to see the Toy Show last night that raised over €5 million for...
Read more
Load more